Looking back over photos I've taken recently I found a few to share. Some people have requested more landscape photos as my surroundings differ from theirs.

This one shows the Aith Lifeboat and Coastguard helicopter displaying their ability to work together. 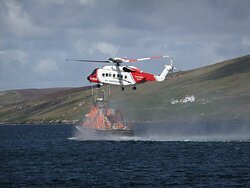 Lifeboat and helicopter work together The downdraft from the rotor blades disturbs the sea's surface and almost obscures the lifeboat. This photo was taken at the annual Aith Lifeboat Gala in June 2013.The house in the photo is where my mother was born and brought up. She was born there in 1917 describes her early life in the book "Slyde in the Right Direction" which was published by The Shetland Times Ltd.

While most of the rest of Britain enjoyed high temperatures and sunshine throughout July, Shetland endured many hours of misty weather - more on the east side than the west side. However I did get out on some sunny days.

This board was made by children from Nesting Primary school when they did a project on Fair Isle knitting. 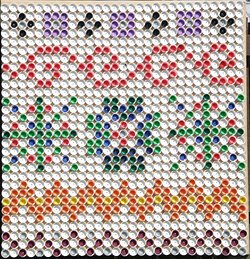 This can be seen outside Shetland Textile Museum in Lerwick which is where I - and over 80 other people -  took part in Kerstin Lindstrom's "Own Our Own Time" project on the first of August.

The weather was windy and cold so instead of the planned two hours of knitting we stopped after about an hour, just before the rain came. 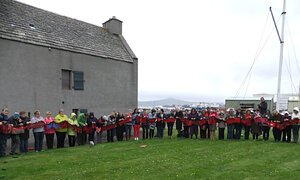 everyone knitting in a circle Damp yarn is not so easy to knit, and damp knitting needs to be properly dried before it's stored for the next time. After we stopped knitting, and as they prepared to gather the knitting together, there was a chance to walk around and see all the starting pieces which had been knitted individually. Kerstin had requested that the knitters used red yarn. 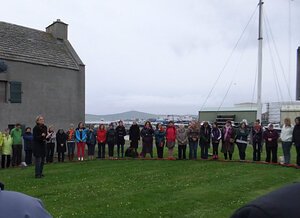 Kerstin explains They were all different, showing different techniques and levels of skill. These pieces were joined in the Faroe Islands using brown yarn; the knitting in Shetland was in green. 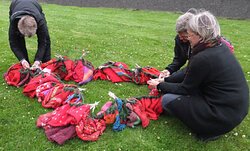 the knitting is tidied up It will be interesting to see how this piece progresses. In spite of the weather, everyone seemed to be smiling and I think there might be interest in creating a large piece of collaborative knitting in Shetland, and bringing together many knitters.

On a sunny day I had a long walk in Lerwick and remembered I had a camera with me - except when I spoke to Oliver Henry outside Jamieson & Smith as he moved bags of really fine fleeces from the Vementry sheep into their store.

This is one of the many cruise liners which visit Shetland each year. Next to it is one of the barges used for accommodating workers at Sullom Voe oil terminal.

These are some of the visiting yachts in the centre of Lerwick. The dark green boat towards the right is The Swan, a restored herring drifter built in 1900. They were making ready to sail to Orkney.

in the centre of Lerwick

Nearby the Dim Riv lies waiting for the next outing. 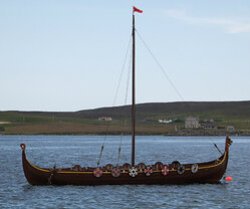 Hopeful that the mist would stay away long enough to enjoy watching the sun set, I visited my sister on 29 July and got the following sequence of photos before the mist blew in. 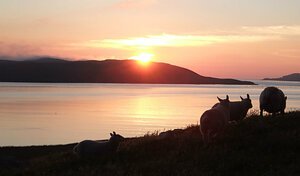 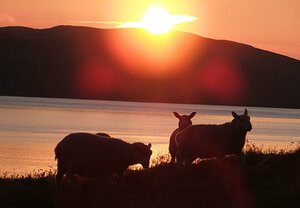 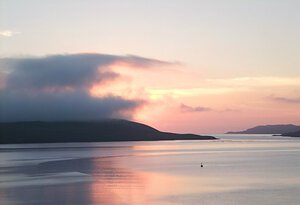 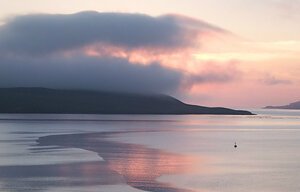 Just before the mist covered all signs of the sun