I was privileged to grow up in Shetland where I was surrounded by knitters who needed to knit quickly and accurately in order to gain an income. There were three generations of knitters in our family home - my grandmother, mother, aunt and older sister. One of my earliest memories is being sent outside to check if I could see my grandmother making her way down the hillside - by that time she would have been about 80, carrying a kishie of peat on her back and knitting as she walked.

I have been knitting for longer than I've been reading and writing, and have no memory of learning to knit. It's nearly 60 years since I knitted my first cardigan for myself, and over 50 since I knitted my first Fair Isle cardigan. Since then I've knitted hundreds, if not thousands, of pieces of knitting. I love knitting Fair Isle - so many colours and patterns to choose I will never run out of ideas.

During my teenage years I finished machine knit garments by hand knitting Fair Isle yokes. At first we used whichever colours and patterns we chose - an invaluable learning experience. Later, when buyers dictated colours and patterns, I found this much less enjoyable as it was repetitive and stunted creativity. I often charted new patterns (motifs) to add variety, and challenge, when knitting the yokes. The graph book containing these patterns is one of my treasured possessions, and I continue to use them. In Ann Feitelson's book "The Art of Fair Isle Knitting", she got inspiration for her "Whalsay Jumper" from a jumper bought from a charity shop in Shetland - one of mine. She describes the patterns in the jumper as "engagingly complex and seem to be unique - I've never seen them in any other sweater, nor in any Shetland or Scandinavian pattern book." She was quite right, these are my unique creations; the only thing she got wrong is surmising that it was a child's jumper - it used to fit me.

From 1972 to 1975 I lived and worked in London. At first I did some knitting for a Shetland business, and accepted some knitting commissions, but this was not my main source of income. From 1975 to 1983 I lived in Yorkshire and continued knitting for pleasure. In 1983 I came home to live in Shetland. Few friends knitted so the only people I shared knitting conversations with were my aunt, Annie, and the knitting instructors who visited the school where I worked. My mother didn't enjoy knitting and preferred to use her hands to wield pen and paper.

In 1998, following an unexpected conversation with Elizabeth Johnston, I visited America and met, among others, Martha Owen who is a resident artist, specialising in spinning, dyeing, feltmaking and knitting at John C Campbell Folk School in North Carolina. She was probably the first person to make me realise that my knitting creations are precious and valuable. Thereafter I - sometimes - started to make notes, and record amounts of yarn used, using a notebook I was given at a visit to the Atlanta Knitting Guild - this too is a valuable possession. I now regret that I never took photos of my knitting; what photos I do have were incidental, not deliberately taken for the piece of knitting in them.

I was encouraged by Connie Smith (nee Williamson) who used to work for Jamieson & Smith, to write knitting patterns, something that very few Shetlanders do. As a result Jamieson & Smith sell two of my designs: Eid Top is sold as a kit and Peat Hill is in their book, "Knit Real Shetland". I donated two lace designs (Hesta and Gairdins top) and two Fair Isle design to the Shetland Guild of Spinners, Knitters, Weavers and Dyers; these are included in the books, "A Legacy of Shetland Lace" and "Fair Isle Designs from Shetland Knitters, Volumes 1 and 2", all published by The Shetland Times Ltd,

I often design items to use up small amounts of Shetland wool as I know there are often spare quantities of yarn left from other projects.

I have had to learn to use vocabulary commonly used in knitting pattern writing. Steek, for example, is a word I believe I first heard when I visited America in 1998, and I had to ask what it meant. It is not commonly used in Shetland and several Shetland knitters have said "I wish they'd stop using it" but language evolves so, somewhat reluctantly, I use it in my knitting patterns. It was interesting to find "steek" written on a graphed pattern in my mother's collection - it was not in her handwriting and must have come from one of the businesses she knitted for.

A steek is a column of extra stitches which means a whole garment can be knitted in the round (no purl stitches are needed, and knitters can always see the right side of the knitting). To make openings for sleeves, neck etc the centre of the column is cut open. Wherever steeks are used I provide full instructions and explanatory photographs.

Derek Reay chose to feature me when he produced the book "Significant Figures in Art and Craft Today" in 2011.

Three pieces of my writing about knitting memories were selected for inclusion in the book "Real Shetland Yarns" (published by Shetland Heritage Publications in 2012).

I helped edit the book, "Slyde in the Right Direction" by Chrissie Sandison (my mother), which was published in 2008 by The Shetland Times Ltd. The book was based on my mother's memories of life in Shetland in the 1920s, 1930s and 1940s and the royalties were used to support a charity.

I contributed to "Shetland Textiles: 800 BC to the Present", published in 2013 by Shetland Heritage Publications.

I've been interviewed by various magazines in the UK and elsewhere, including Shetland Life magazine, November 2018.

I have been interviewed by Andrea for Fruity Knitting podcast, episodes 39 and 63.

I presented a paper "Knitting in Shetland in the 1960s", using my mother's diaries, at "In the Loop 3" knitting conference in September 2012. Researching this was very interesting so I intend to spend more time studying the diaries. I presented this paper in Shetland on 13 April 2013 and it will be the subject for my talk at Shetland Wool Week 2014. Knitting Traditions published more of my mother's diary entries, along with my 'Slyde' pattern for a small cardigan with a Fair Isle yoke in Spring 2014. 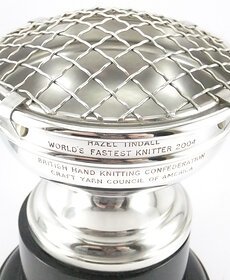 In 2004 I qualified, by knitting 240 stitches in 3 minutes, to take part in the competition to find the World's Fastest Knitter. There were three other competitors, from the UK and the USA. We used 4mm needles and 60 stitches in each row, and knitted stocking stitch for one 3 minute session. I won the competition by knitting 255 stitches in 3 minutes. I was allowed to use double pointed needles and a knitting belt and, if we wished, we could have someone unwind the yarn. Some Shetlanders sponsored me (one gave as much as 25p per stitch) so a sizeable sum of money was raised for the Shetland Textile Museum. The prize was a cheque for £1000 and a beautiful silver rose bowl, engraved with the date and my name, sponsored by what was then known as the British Handknitting Confederation (now UK Handknitting Association) and the Craft Yarn Council of America. 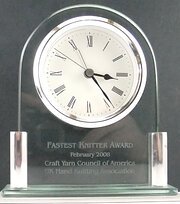 In 2008 I was sponsored by the UK Handknitting Association to represent the UK at a competition in Minneapolis. Five knitters representing Canada, France, the Netherlands, the UK and the USA competed. The contest was regulated to ensure an even playing field. Knitters had to use 5mm knitting needles (either straight or circular - I used a straight pair of single pointed needles made by a blacksmith). We all used the same 100% wool. A knitting belt was not allowed (getting double pointed 5mm needles probably would not have been easy). All contestants had to complete as many stitches (60 to a row) in three minutes - there were three timed sessions. I came first with 262 stitches; my nearest rival was Miriam who knitted 243.

In 2017 I entered an on-line competition to find the fastest knitter in the UK. The other winners competed at events in England but there was no final.

These achievements led to many invitations including appearing on two television programmes - Paul O'Grady Show and Weakest Link. I also feature in A-Z of Shetland.

My main wish is to encourage knitters to adopt an efficient knitting method, and produce knitting of a high quality. After all, we all want to get the knitting finished and ready to wear/use/admire so we can move on to the next project.

I have often been recorded, but usually from an angle which is not easy for people to see what's going on - there are some videos on YouTube and I put one short video on YouTube (below), showing how I knit. While doing this I realised how important the right thumb is in controlling tension. So that the camera could pick up what was going on I had to keep my right thumb out of the way.

I have worked with professionals to produce two instructional DVDs, "The Art of Fair Isle Knitting" and "50 Tips from Shetland Knitters"; Elizabeth Johnston also appears on the latter.

50 Tips from Shetland Knitters from Hazel Tindall on Vimeo.

I am a member of Shetland Guild of Spinners, Knitters, Dyers and Weavers as well as The Knitting and Crochet Guild and on UK Hand Knitting Association's Register of Knitting Artists.

Meeting knitting enthusiasts when they visit Shetland - individuals and groups.