Casting on and casting off

Recently it's been really good to have the monthtly meetings of Shetland Guild of Spinners, Knitters, Weavers and Dyers in person. We met on Saturday and the activity for the day was to learn a few different ways to cast on and cast off. Members were spread around tables and those who had something to share moved round. I showed how to do a Channel Island cast on which I used for my Hamnafield pattern. I learned this cast on, which is sometimes called the Guernsey cast on, at a workshop given by Beth Brown-Reinsel a number of years ago.

Others shared how to do a cable cast on as well as one way to do an i-cord cast on. I'm not sure how many methods of casting off were shared. I cast off a few stitches using a new-to-me method which involved circling the right needle in either clockwise or anti-clockwise directions but it's not one I have the patience to learn. It seems we all have our favourite methods of casting on and casting off (this is likely to be the first ones we learned) and at the start of our knitting lives it was common to be unaware of other ways to cast on and cast off. Vocabulary varies too - some say 'bind off' while Shetlanders 'lay on loops', 'lay up' a piece of knitting and 'lay aff loops'. I always think a 'loop' is a more appropriate word than 'stitch' when describing what's on our knitting needles.

I also had taken along the tools to show ways to do a crochet cast on. I generally use this method whenever a provisional cast on is needed. There was already a lot going on, and there's a limit to how much we can learn in a day so I didn't demonstrate that. If you are curious to learn, it's included in a tutorial I did for Jamieson & Smith for Shetland Wool Week 2021, starting at about 14 minutes. 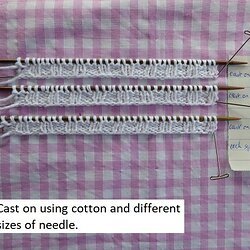 Following an earlier blog about using different sizes of needle for a long tail cast on, I did some more experimenting, this time using cotton instead of wool. I think the bigger needle needed a bit more tail yarn - it's a while since I did this and the photo is the only evidence I have. The results were very similar and I can only conclude that the width of the cast on edge is constrained by the size of the stitch made during the casting on - a bigger needle can give more width. I keep forgetting that many people cast on with the tail and working yarn in the left hand only but I've not tried that. Perhaps holding the tail end of the yarn in the left hand and the stitch-making yarn in the right hand does make a difference to the results. I find it easier to be able to pull the two ends in opposite directions. It would be interesting to hear from anyone else who has tried this.