A recent discussion on Ravelry about long tail cast on has had me experimenting. I had suggested that using a larger needle for a long tail cast on would make it more stretchy. This was somewhat vehemently denied, so I began to doubt myself.

The discussion on Ravelry started from a query about knitting a top down jumper where the knitter was concerned that the cast on would be too tight to pull over the head so was looking for suggestions. It can also be useful to have a stretchier cast on for cuffs, especially if the wearer has large hands. 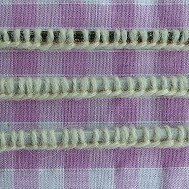 Using Shetland jumperweight yarn and long tail cast on I made three sets of 40 stitches using 3mm, 3.25mm and 3.50mm needles. I didn't try to spread the stitches any wider than normal as I worked the cast on. The coloured threads were added to the two pieces cast on using bigger needles so I wouldn’t get them mixed up.

Using 3mm needles for all samples I knitted 7 rows in rib. I knitted at my usual tension, without making any effort to knit any either looser or tighter than normal. The pieces were all about the same size once they were finished. 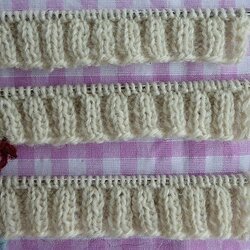 The needle sizes added to the middle photo are those used for the cast on. All the pieces were knitted with 3mm needles. Someone suggested that using the bigger needle size for the cast on makes for a sloppy first row but I don't notice it.

Once finished I pinned the three pieces out then stretched the cast on edge as far as it would go. I have to say I was a little surprised as to how much difference it actually makes. The cast on doesn't remain stretched and as soon as I unpinned the samples the biggest one remains at less than 0.5cm wider than the smallest. A piece of squared gingham is perfect for showing the results of this experiment, and is really useful when pinning out smaller pieces of knitting. 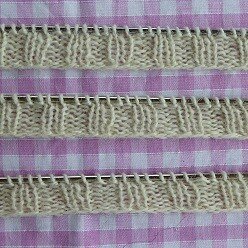 Cast on edge stretched as far as possible

It was nice to know I've not been perpetuating a myth.

Since posting this blog I experimented again using cotton; the results were similar.