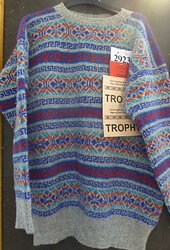 Alyssa is just 15 and is working on her next jumper At the start of August in the space of eight days I visited three agricultural shows in Shetland - Voe, Cunningsburgh and Walls. Apart from livestock all the shows have sections for knitting, the biggest attraction for me. My blog about the Voe Show included the photo of teenager Lauren Anderson's exquisite one ply shawl. After my visits to Cunningsburgh and Walls I am delighted to focus here on the knitting entered into the shows by young knitters - the oldest of them is only in her twenties. It is so good to see their knitting, and the pride they have in entering (and winning) competitions - not many years ago few would have admitted to being a knitter.

Cunningsburgh Show is open to anyone living in Shetland, unlike the Shows at Voe and Walls which are open to residents in designated areas of Shetland only. At Cunningsburgh, in the childrens knitting section, there were entries from Dunrossness, Cunningsburgh, Burra, Trondra, Sandwick and Quarff. At Walls entries came from Walls, Skeld and Reawick and in Voe the majority of entrants were from Whalsay. Until 2010 children at Primary schools all had hand knitting instruction but that was withdrawn to save money. Successful knitting clubs, organised voluntarily by school staff, at Whalsay School and Anderson High School are thriving and, starting last year, ShetlandPeerieMakkers ensured that more schools - Cunningsburgh, Burra and Skeld - have volunteer tutors. It is very rewarding to see that the fruits of this project were seen at the Shows, and I look forward to what the knitters will do next year!

I'm delighted to see this renewed interest in knitting and will do all I can to encourage the knitters.