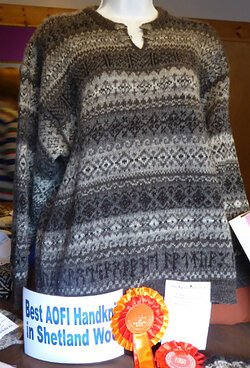 Hand spun yarn from her flock, hand knit There were close upon 300 entries in the knitting section at the Voe Show this year, much higher than in the past. As one of the five judges it was a great chance to peruse some wonderful knitting. Jamieson & Smith’s colour box competition entries were separated from the rest, and Ella judged them. For the remaining knitwear the judges worked in pairs, with Wilma and Irene starting at one end with machine knits, while Lauretta and I started at the other end with lace, working till all had been judged. Show stewards were on hand to record the results and they immediately started the task of displaying the entries for the many visitors who came to the show later in the day.

After all the sections had been judged the five judges had to jointly select the trophy winners. 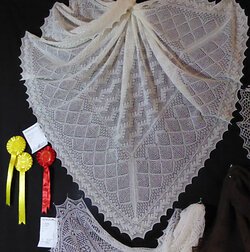 Prize winning shawl Lauren Anderson's exquisite shawl was judged the most outstanding piece of knitwear - I am sure no-one disagreed with that decision! Lauren is the cover model of "The Book of HAPS" by Kate Davies Designs.

Judging starts at 9am and the aim is to be open to the public at 12 noon so it was a busy morning!

One of our stewards is a keen young knitter who was paying attention to what we were doing. The first thing is to look for any faults as, when the standard is high, a loose thread can be the difference between first and second - and so vexing to find a perfect piece of knitting has such a tiny fault. When judging the shawls the first thing we looked at were the corners to see that they were neat and all looked the same; the edges had to be even too, and each one was unfolded so we could see the whole thing. Where scarves had been knitted in two halves and grafted (cockleshell, for example) we looked at the join to see that it had been well done. Fair Isle was checked inside and out to see how neatly it was finished. Gloves were tried on and the base of the fingers checked to ensure there no gaping holes.

In the section for children there were about 20 entries, with categories for children in Primary 1-3, Primary 4-5, Primary 6-7 and Secondary. The youngsters could enter animals, people, garments, Fair Isle hats and headbands, Jamieson & Smith Colour box. It was good to see so many of them had chosen to knit things to wear. Most of the entries came from Whalsay where Amanda Pottinger has led a knitting group which meets regularly throughout the school year. As ShetlandPeerieMakkers grows I hope children from other areas will enter in future.

Apart from knitting, there is much more to admire - patchwork, crochet, baking, recycled items, leatherwork, flowers, vegetables, sheep, cattle, pets and much more. My camera battery went flat so I didn't get as many photos as I hoped. I am indebted to Linda Shearer for the photos of the knitting by school children.