Yokes - bottom up or top down? 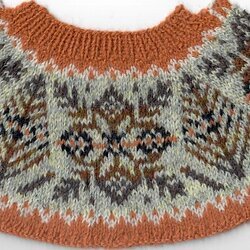 Section of yoke knitted top down Yoked garments – with either a Fair Isle, cabled, lace (or other) yoke – are currently very popular, and I see more are being knitted from the top down. Bottom up yokes are shaped by decreasing the number of stitches, with most of the decreases happening in the top half of the yoke. Top down yokes are shaped by increasing the number of stitches as you start the yoke. 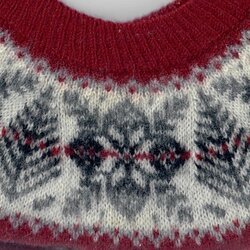 Recently I’ve seen visitors to Shetland wearing top down Fair Isle yokes and my immediate thought was that they did not look as if they would be very comfortable to wear. In addition to making the curved shape by increasing stitch numbers, the only way for the front neck to be lower than the back was with some short row shaping at the back - more rows might have achieved that and would have had to extend to the shoulder tops. What I noticed is that all had a fold of knitted material in the throat area which I would find annoying and I thought it rather spoiled the appearance. Another looked as if the Fair Isle pattern was very stretched from shoulder to shoulder which also helped create the under-throat fold. I’m told that one of the reasons top down jumpers have become so popular is to get a better fit as you can try on as you knit; perhaps that works with other shapes. 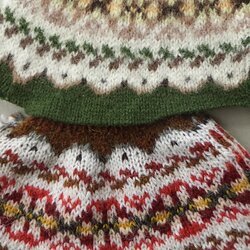 Top down and bottom up yokes Apart from these necks looking ‘kyufset’ (a dialect word meaning untidy), I wondered how making the increases, which tightens the adjacent stitches, would affect the appearance. To search for the answer, I chose two pieces of yokes knitted, most likely by my mother, in the 1960s and replicated them from the top down. The one with the tree looks fine but I am not so happy with the appearance of the other which has a lot of increases happening in two of the rows. To replicate it exactly, the decreases between the neck and the start of the colour work was to make 5 stitches from 3, and after the 4 row peerie pattern to make 7 stitches from 5. This rapid increase in stitch numbers means the knitting is not so keen to lie flat – I suspect that comes from the strain on the stitches surrounding the increases. This could be fixed by having a wider neck and working fewer increases within the yoke. The same rate of decreasing in the original lies quite flat. In other rows the increases were to make 6 stitches from 5 and 8 from 7 which lie flat. The border pattern of the yoke with five patterns has 3 colours in two of the rows which, apart from giving more to concentrate on during knitting, makes the fabric much less flexible and thicker.

It’s not common for Shetland knitters to use short rows – though I did use them in the 1970s when I knitted a Fair Isle panelled skirt*, though I would not have known to call them short rows then. I did use some short rows in Hamnafield as the owner wanted quite a low neck, and I felt that gave the best fit. In the 1960s, when hundreds of thousands – maybe millions – of Fair Isle yoked garments were exported from Shetland, the single colour parts were machine knitted. The shape of the machined part was as simple as possible for the machinist to be able to produce many 'bodies' each week. To make the front neck lower than the back they simply knitted fewer rows between the armhole and the starting place for the yoke. The yoke knitters picked up the machine-knit stitches, and the decreasing in the hand-knitted yoke gives all the shaping that’s needed, enhanced by washing and dressing on a jumperboard. The curved shape is especially obvious in the photos of the new pieces knitted from the top down.

I’ve written a number of patterns with yokes – both lace and Fair Isle. A new pattern for a yoked cardigan, Benniegio, is being technically edited at the moment. After doing this little bit of research into top down Fair Isle yokes, I think the next yoked pattern will be top down simply because it will be easier to write. As I’ve often said before, writing takes much longer than knitting and I know it will not be so easy to knit the boring body after knitting the more interesting yoke. With a bottom up garment, there’s always the anticipation of the colour work to keep me going; it's always fine to knit with a decreasing number of stitches, and I find decreasing is easier (quicker) than increasing.

*The skirt is now part of the Shetland Textile Museum collection.