Foula sheep One of the reasons I wanted to visit Foula over the summer was to meet Magnus Holbourn, the man behind Foula Wool.

I chose to go there on a boat trip from Scalloway which included going around the whole island. 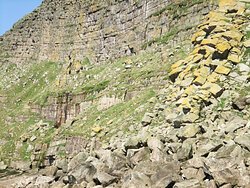 Foula sheep From the sea we could see the sheep on the sides of the cliffs, in what appears a very inhospitable envirnonment. 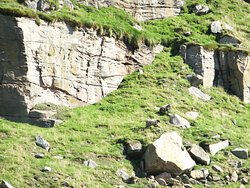 Foula sheep missed being sheared Some spinners have told me that they believe that the poorer the grazing the better the wool. I think these sheep were too wily to be rounded up at clipping time. If they could have been caught it's likely they could have been 'rooed' - the fleece plucked in handfuls.

Magnus and his family live in a house overlooking the harbour. First he took me for a walk up the road to see his flock. As we walked we spoke about his reasons for focusing on wool production rather than meat production. After his father died he inherited a very large flock of sheep. He decided to shrink the size of his flock, including keeping rams and ewes apart to reduce the numbers of lambs. He is uncomfortable with sending his animals on an arduous journey by sea - 2 hours from Foula to Walls on the Shetland Mainland - and onwards aboard a stock truck for another hour to Lerwick and, perhaps, another ferry journey (overnight) to mainland Scotland.

At the same time he found that shearing the sheep and sending the wool to market often resulted in a loss as the cost of getting it off the island was greater than the income. Encouraged by his partner, Justyna, he came to realise that Foula sheep produce special yarn, in natural colours, so it would make sense to market it accordingly. They sent some samples to a spinning mill and were deighted with the yarn they got back - they chose to have it spun into a 3 ply Double Knitting weight. They sort the fleeces by colour, and to remove all the dirty bits, before it goes to be spun. In this way they are sending only the best parts of every fleece which keeps transport costs to a minimum and ensures optimum yarn quality. 2013 was the first year they were able to offer this yarn for sale during Shetland Wool Week but I wasn't able to get there unfortunately.

Shetland Wool Week is a very busy time and the new yarn from Foula slipped my mind until earlier this year when I contacted Magnus. He sent me a sample pack of all 7 shades. It arrived just before I had an unexpected phone call to accompany my sister to hospital. As I rushed out I grabbed the bag of yarn and knitting needles. It was a good decision as we spent several hours at the hospital as various tests were carried out, and keeping hands busy helps distract the mind from worrying about what might be wrong - maybe I should have taken extra needles so we could both knit. I knitted a fingerless glove; the thumb isn't perfectly positioned but it is incredibly warm so I will have to knit one for the other hand. The colours blend together beautifully, as natural Shetland colours always do, and it is a useful tension swatch. Hospital tests revealed nothing nasty so that was a relief.

I have now knitted a cardigan using Foula Yarn which will make its first public appearance at the Opening of Shetland Wool Week 2014, on Sunday 5 October. I will be writing the pattern but other distractions mean there is not time to have it technically edited before Wool Week. I am looking forward to seeing what other designers have made from Foula Wool as well as the work other producers, and students from the Contemporary Textiles course at Shetland College, have on show.

It was good to walk the route Magnus takes to mail wool all over the world. I hope he continues to send many parcels over the coming years.