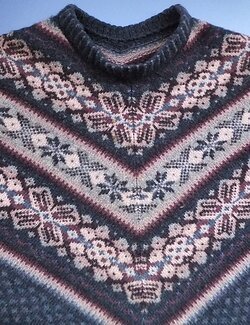 Jumper knitted in one piece This year when I was at Edinburgh Yarn Festival one of the jumpers I wore is one which I know I will never write up as a pattern for others to follow. I like the colours but not so keen on the shape. It's not a favourite so hasn't been worn very often - usually a few weeks, then washed and returned to a box. Now it is almost 20 years old and still in perfect condition - though wearing it while pruning gooseberry bushes maybe hasn't done it any good. This is the third jumper I knitted from the same rough instructions.

On my first visit to America in 1998 I saw a chunky jumper knitted like this but it had stripes of solid colour. The knitter kindly shared with me how she had done it. Knitting starts at the side, at waist/hip level, immediately below underarm, with just a few stitches. Increases are worked at both ends of the needle, and in the centre. I experimented to figure out how often I would have to make increases to get the shape - it's not as simple as increasing at both edges, and at both sides of the middle stitch, in alternate rows. Eventually you get a triangle. Once the long side of the triangle is half the width needed you put it aside while you work a matching triangle - that works well with single colour knitting but for the fair isle one I added steeks so the two triangles were knitted at the same time. Sleeves are next to be knitted; they are knitted in the same way with one triangle for each sleeve, and you stop knitting when the sleeve is as wide as you need. All the stitches are then put on one needle - even I have to admit that a circular needle is easier than double pointed needles when all the stitches are put together. The pattern continues with decreases worked at centre front and back and at the tops of the sleeves. To start with decreases were worked every third round but after a bit they were worked every second round, and towards the neck the decreases became more frequent. The cuffs and hem were knitted downwards from stitches picked from the edges of the triangles, and a few short rows at the centre front were worked to straighten the bottom edge. 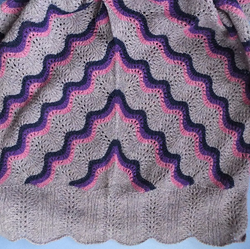 The lace jumper I thought it would be interesting to try this with lace so the first one I knitted is lilac with pink, violet and navy stripes and the pattern is da aald shell (the old shell) which is often found in haps. You can see me wearing the lace version here. When I knitted the lace one I realised that a gusset at the underarm would improve the design so the fair isle versions both have small gussets.

Later on I knitted an open front cardigan in this way - I remember it went to the Millennium show in Lerwick so I must have knitted it in late 1999 or early 2000. Someone really liked it and bought it so I have only a couple of rather poor photos as a reminder.

I knitted two fair isle jumpers in this style but don't think I will knit another.

When interviewed in 2018 for the Fruity Knitting podcast (episode 63) I was asked to explain this construction so knitted another lace cardigan.