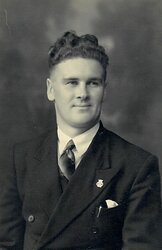 James Andrew Sandison Fathers’ Day inevitably evokes emotions and memories. This week my thoughts have gone back 20 years, remembering the final days of my Dad’s life. I have written and spoken a lot about my mother but less about my Dad. Although he was away at sea or at the whaling when I was very young he was a steady influence throughout my life. I always think of him when I might appear to be wasting my time for he always said that “if you’re enjoying something it’s never a waste of time”.

James Andrew Sandison (known throughout his life as Jeemie) was born on 27 October 1916 at Orbister, North Mavine, Shetland, to Ann and James. The house had a thatched roof, beaten earth floor and an open peat fire which was never extinguished. There was no running water or sanitation. They had a small croft; a subsistence way of life. His mother had been at the gutting for at least one season and also had worked as a maid at Busta House before she married. He had three older sisters – Joan (always pronounced Joanne), Annie and Mary – and younger brother, Johnnie.

My grandmother was a knitter and spinner. I remember my mother telling me that her knitting was perfection – her ribs looked machine knitted. I wish I could have learned how she achieved that. As well as knitting jumpers, stockings, caps and underwear for her family, she tried to knit either a spencer or shawl every week (as well as spin the wool) to barter at the shop.

My grandfather worked the croft and in the summer he caught fish as often as weather permitted him to take his boat to sea. As they grew, the children were taught to fish and handle a boat so were able to go fishing on their own. The fish were eaten fresh and the surplus was salted for the winter. They grew food – potatoes, cabbages and turnips – for the family and their animals, owned a cow for milk and butter and hens provided eggs. In the garden they grew raspberries, redcurrants, blackcurrants and gooseberries; the children grazed on the fruit when it was ripe. Only rhubarb – not too tasty raw – was used for jam making; rhubarb is a lot easier than berries to prepare for jam-making. They didn’t need much else apart from tea, sugar, soap, salt and paraffin. Oatmeal and flour was bought in bulk and came by sea. They went barefoot during the summer months but in winter they got leather lacing boots which were filled with studs to prolong their life. 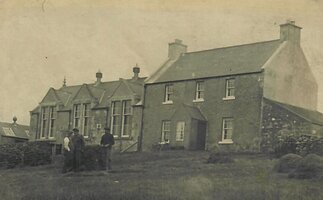 Urafirth school The children attended the school at Urafirth, walking about two and a half miles every day. They crossed a broad burn over a narrow plank bridge, climbed a steep hill, through a gate onto the common grazing land, then across a stretch of wet moorland to reach the road which led downhill to the school. I am not sure what age Dad was when he started school but his sister Mary was 7. For lunch they had a tiny bottle of milk and a bit of bread; this was eaten standing in the school porch or outside. Before going to school Mary hadn’t seen many children other then her own family, and thought all children had fair hair. 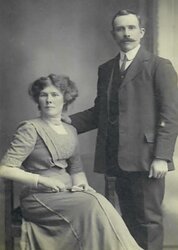 Captain & Mrs Isbister In 1913 my grandmother’s sister, Mary, had married a sea captain, William Isbister, so was more wealthy than the rest of the family. My grandmother’s next child, born in 1914, was named Mary Wilhelmina after the couple. I seem to remember being told that Mary Isbister knew she couldn’t have children so she took a special interest in this one and determined that the young Mary would have an education. At twelve years old Mary would have started her secondary education at the Anderson Educational Institute (now Anderson High School), staying with her aunt who lived in Lerwick and had been widowed that summer. Mary completed school, gained a degree at Aberdeen University and returned to Shetland to teach; she would have preferred to be a journalist but she had to follow the career path chosen by her sponsor.

Mary was the only one of the five children to get formal education beyond the age of 14. Dad and his sisters didn’t seem to resent this but maybe observing that she did not enjoy a particularly contented life shaped their thinking. The youngest of the family, Johnnie, lost his life at sea, aged just 37; he was second officer when the fishery cruiser Vaila struck rocks off the island of Lewis in 1957.

Hestataing In the early 1930s the family moved from Orbister to East Burrafirth, to live about 2 miles from where my mother grew up. This house was marginally better than the one they had left. Part of the house was occupied by an elderly man but when he left to stay with his family they were able to use those 2 rooms also. At one time they used the rooms to keep North Mavine men who were working on nearby road construction. 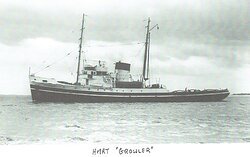 Growler Dad left school at 14 and his first job was singling turnips at Findlins Farm in Hillswick. He then went to the fishing before sailing worldwide on cargo ships. It was quite usual for young Shetland men to choose a life at sea, especially as there weren't many jobs at home. During World War 2 he was a merchant seaman on the Growler, one of the tugs which belonged to the Royal Navy. They sailed out of Cambeltown, part of the Atlantic convoy. Their task was to rescue ships which needed to be towed following enemy attack, as well as rescuing survivors and recovering bodies. In his late 60s when someone asked him about the war his answer was that “there are some things a man should never see”. His children understood wartime service was not something he would describe. Life at sea continued after the war with at least one season as ship's carpenter at the whaling, followed by a time with Salveson's as bosun on a cargo ship.

My early memories are of Dad coming home from the whaling in South Georgia; the whalers were away for the winter and home for the summer months which were filled with peat cutting, haymaking and harvesting before they left for the next winter. He also got some work driving for a local haulier during the summer which helped finances. I suspect we were used to our mother’s attention and didn’t particularly enjoy having to share her with him. I’m not sure what age I would have been when I decided I’d take my younger sister for a drive in his car. It was parked on a slope just in case there was a problem getting it to start. I’d got the engine started and was about to wrestle with the handbrake when he came running towards us. Naturally he shouted, fearing what might happen next. We quickly scuttled out of the car, running into the house to find our mother who was sure to protect us. They were both relieved I’d not managed to release the brake. Another early memory is going to Lerwick to see him off on his next trip to sea. We didn’t go to the pier but said goodbye in the lane opposite the Bank of Scotland. I held out my hand for him to shake as this is what I’d seen everyone else do – it brought a smile to their faces at a sad time. 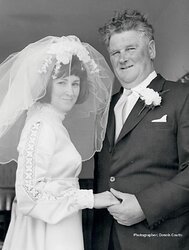 photo by Dennis Coutts I would have been about 10 when he was able to get work – most of the time – in Shetland. There is one particularly poignant entry in my mother’s diary for November 1966 where she wrote “Jeemie has been paid off today so that’s not too good a prospect. We have a lot of things to get and Christmas in the offing”. He worked in the building trade and workers were often paid off over the winter when weather made it too difficult to work. In the 1970s his employers had a contract to improve Lighthouses so he spent periods on Muckle Flugga, Skerries and North Ronaldsay, and maybe other lighthouses. Latterly he was a partner in a building firm until he retired.

Dad was a very able joiner but could turn his hand to anything, including some sewing (patches, buttons etc), and net mending/making, but he didn’t know anything about knitting. Over the years, as the family grew, he extended the house to give extra bedrooms, then added a bathroom in the 1966. In later years whenever any of his children undertook house improvements, he was always available to help. 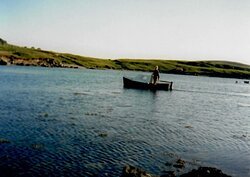 A neighbour's mink farm sheds are on the skyline He always said that folk needed to make decisions while they were still able to do so. Giving up the croft was not difficult as it is hard work so they were glad to move to a sheltered house which was easy to heat and maintain. As my sister had taken on the croft he was still able to go there to potter in one of the sheds most days to begin with, then less frequently as he got older. He liked to go off in his boat, either to enjoy visiting some of the uninhabited islands or to fish. Reading was a favourite pastime, and they always enjoyed driving to all parts of Shetland, especially to North Mavine. Visitors were always made welcome and, because of my mother's interest in genealogy, these came from all over the world. Over the years he enjoyed meeting his first cousins who had grown up in Canada and New Zealand, and gladly showed them around Shetland. When my mother was feeling lost after me and my siblings left home he reminded her that they had to be thankful we were able to go. When I came back to Shetland with a husband and two young sons they happily had us stay with them until we found a house. They had spent too long sharing a home with Dad's parents and sister and knew that three generations under one roof is not the best idea.

As I searched for photos for this blog I found a piece my aunt Mary had written about her early life so I have used that for describing the family's early life.

As always, there is so much more I would have liked to ask my Dad but his life ended unexpectedly, after routine hospital procedures went fatally wrong, so the opportunity for questions and conversation was stolen. He died in Inverness on 22 June 1998.

Addendum Soon after I published this blog a cousin sent a message to say that her husband had had a conversation with him about the war so today I've learned that his ship was torpedoed in the Mediterranean and the ship sunk. He was torpedoed 3 times and every time rescued.