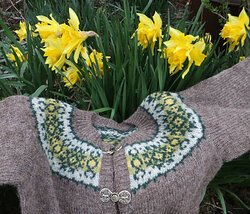 Slyde cardigan Late last year I was asked if I could write an article and a knitting pattern for Knitting Traditions Magazine, spring 2014. I had previously researched my mother's diaries for the 1960s looking specifically for references to knitting, which she hated but had to do to pay the bills. I used these diary entries to present a short talk at 'In the Loop' conference in Winchester in 2012. The invitation came as a result of that.

Much of my mother's knitting in the 1960s was putting Fair Isle yokes on to machine knit bodies produced by other home workers. It was appropriate therefore that the knitting pattern should be a yoked garment. As time was short I knitted a small cardigan and wrote the pattern in 2 sizes. As yokes are again very popular I can see that I will need to design more in bigger sizes.

The cardigan was sent to the magazine last year and returned today along with copies of the magazine. It is wonderful to see my first knitting pattern in a magazine, and good to see how well the colours in the yoke echo the daffodils.