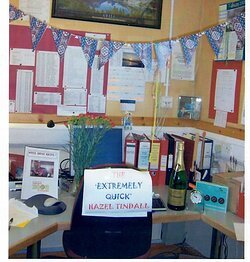 Welcome back to work! 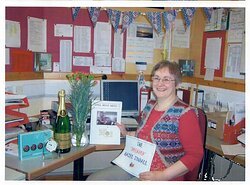 Back at work - what a welcome! I am constantly decluttering - though a casual observer would find that hard to believe! Recent media coverage of the book "The Gentle Art of Swedish Death Cleaning" has spurred me on.

This week I found a folder which my co-workers presented to me in February 2008 after I made a short trip to Minneapolis to represent the UK in a competition to find the world's fastest knitter. They had gathered together some of the media reports for me to read, decorated my work area with fair isle bunting and I was presented with lovely gifts. Happy memories of very supportive work colleagues. It certainly brightened up February which can be a very dreary time of year.

I was sponsored by UK Hand Knitting Association and was accompanied by my husband. We almost didn't get there as our evening flight from Shetland to Aberdeen was cancelled. We stayed at the Sumburgh Hotel rather than travel home as we needed to be at the airport early in the hope of getting on the first flight. Fortunately several of the passengers on the flight had very little luggage so we were able to travel and caught our next flight with little time to spare. We arrived in Minneapolis the day before the competition and had a walk through the Mall of America. Minneapolis is very cold in the winter; we were told that the Mall was where the elderly went to walk as it was warm. During the morning of competition day we enjoyed a guided bus tour of the twin cities of Minneapolis and St Paul - we had travelled a long way and didn't want to see only the interior of a hotel and shopping mall. 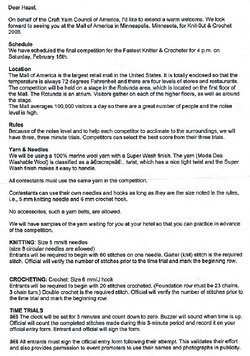 It was interesting to find the list of rules for competitors. I don't know why but "accessories, such as yarn belts" were not allowed. I assume this meant a knitting belt but I didn't challenge it. 5mm needles are a bit too thick to use in a belt and would have needed one of the holes to be enlarged so would have spoiled the belt. I had been gifted two single pointed steel needles by a blacksmith so I used those. They are fairly heavy but they are nice to use, very smooth and make a soothing sound as I knit. I don't often knit with yarn thick enough to warrant 5mm needles so haven't used them for a long time.

In the 10 years since I won that competition, the interest in knitting worldwide has grown massively. Back in 2008 I was quite despondent about the future of handknitting in Shetland as so many had given it up. However as I write this I am listening to BBC Radio Shetland "whit's on" and they mentioned two weekly knitting/craft groups meeting tonight, open to anyone who wants to go along. There are many other groups now, all over Shetland, and the very successful Shetland Wool Week has helped re-kindle the interest in knitting. Older knitters are now being sought out to help guide the younger ones and a number of knitters are enjoying their involvement with ShetlandPeerieMakkers too.

I'm delighted to say that the future of hand knitting looks bright!