Shetlanders call knitting "makkin" so we use "makkin belts" but my blogs are in English rather than Shetland dialect which most readers would find difficult to read and understand. I also find typing in dialect really hard.

My paternal family grew up in North Mavine, the northern part of Shetland Mainland. There was no tradition of using belts there and they knitted one colour with the yarn in their left hand. One lady told me she first encountered a makkin belt when she went to college and met knitters from other parts of Shetland - this would have been circa 1960.

I have collected a few belts - these are always handy whenever I am at a workshop.

This is my belt which is probably about 50 years old. It's probably better now than when it was new as it is soft and flexible. I just need to knead it a bit to move the stuffing (horse hair). When using bigger needles (eg 4mm) I try to limit the holes used so that I don't stretch too many. The knitting needle shouldn't have room to wiggle about.

Hazel's mother's knitting belt This next belt belonged to my mother. I can't guess how old it is but could date from the 1920s. This belt is not as soft as mine. For ladies of my mother's generation the belt was worn most of the day - Monday to Saturday but never on a Sunday - as they had to knit whenever there was a spare moment. Thousands of children grew up to hear the threat "I'll tak aff me belt ta dee" when they were misbehaving.

I wish I knew who owned this well used belt. I think thin steel needles caused the scrapes to the leather, and the knitter has almost always worn it the same way, giving the uneven wear. There is a hole on the back of the belt so I think she must have had to train herself to put it on with the buckle end to the right. 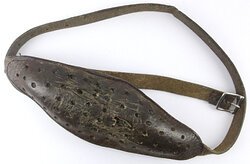 This is another old, well used belt with evidence of frequent use of sharp thin steel knitting needles. This belt also has a hole on the back caused by repeated pressure. 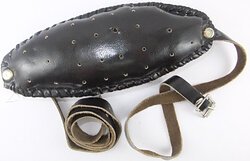 This belt hasn't been used very much, and is, I think, newer than the other belts. The padded area is wider than the older belts.

knitting belt made from recycled leather

This is another belt which has not been used a lot. It looks as if it has been made from a school satchel. It's not very flexible and the padded area is the widest and longest of my belts. 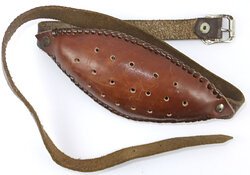 knitting belt for a child

The last belt is for a child and has not been used much. I had high hopes that my grand-daughter will use it but she has no interest in knitting, much preferring drawing and sport.