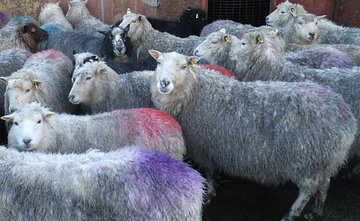 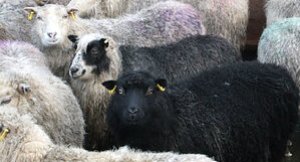 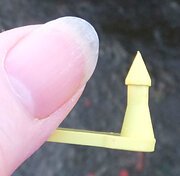 Part of ear tag which goes through the ear After a prolonged spell of really windy and rainy weather it has been good to look back at photos taken earlier this month, to remember how good Shetland can look in the winter.

My sister, Alice, works the croft where we grew up and one calm day at the beginning of January she asked to help with sheep. Getting the sheep gathere in was not difficult for they are always keen to get extra feeding so the rattle of a bucket of ewe nuts is all that's needed.

Alice wanted to record which ewes had been with which ram so that she knows which dates are likely to be busiest at lambing time, and this has to be done before the rain washes them clean again. Each ewe has a unique number which also identifies the croft. My job was to note down the ewe number according to the paint colour on her rear end. Usually it was easy to see the colour, especially the white sheep, but not so easy with the moorit and black.

It was opportunity to give them some worm and fluke drench with added cobalt and selenium to help keep them in good condition.

The last job was to drench the six 'lambs' (some of next year's breeding ewes) which had been kept indoors for about 6 weeks. They also needed to be ear tagged; not a very pleasant job and not very nice for the lambs. The first ear was not too bad but they knew what to expect for the second one. They were let out afterwards and had a good run around as they enjoyed the freedom of a big space once again.

While all this was going on I was distracted by the ever changing sky.