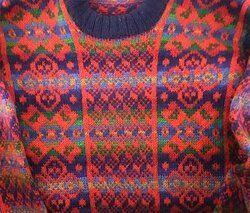 Henry's comment gave me a name for this jumper After reading an article in the Guardian, I felt compelled to write about my own experiences of the drive to raise money through Christmas Jumper Day, and why I refused the invitations. Whilst it is laudable that the charity suggests folk "dig out your favourite festive sweater", I fear that this is ignored - there appears to be thousands of Christmas jumpers on sale just now.

Last year I turned down a request to publicise Christmas Jumper Day - I was asked to take an expenses paid rail journey knitting a Christmas jumper as I travelled, then show it off somewhere in London. Knitting a jumper takes time and effort and I don't see the point in knitting something which is Christmas-specific.

This year I got an equally perturbing request from a publicity company who were working for a large business. Following a phone call they sent me a summary of the request:

1. We will work with a supplier to ethically produce a large quantity of Christmas jumpers in a few designs. These will be sold at X stores across the country, with proceeds going to Save The Children.

2. On launch day, work with yourself to be in one X store and knit bespoke jumpers in real-time for fans.

As our speed knitting guru, we would work with you to:

• Identify the best style(s) to put forward to knit on the day, and how long each jumper would take to knit

• Potentially create knitting jumpers ahead of time, to add bespoke elements to on the day (e.g. personalised letters, sewn on by swiss darning)

• Travel to the location for launch day (we would pay for all your travel, accommodation and sustenance during this time, appreciate it would be a 3-day round trip)

• Take part in the knitting activity in store on launch day, personalising jumpers in real time

• Have your photo taken on launch day

• Sign off on a quote, which we will draft on your behalf, to be included in the press release (and will be issued to media at launch)

I gave several reasons for turning down this request:

Whilst the exposure, especially as I have a new download/DVD, would be welcome, the opportunity you offer is not filling me with enthusiasm!

1. Tiny bits of knitting are fiddly and time consuming, even if it is just a few stitches. Adding sleeves complicates the construction.

2. Repeatedly knitting the same (in this case pretty much useless) thing is tedious, even if I had interesting conversations at the same time.

3. Knitting lots of these in advance is not appealing!

4. I am not convinced that mobile phones need to be 'kept snuggly'.

5. I suspect that ethical production of a 'large quantity' will ultimately find a large quantity clogging up landfill in the not too distant future. Most likely man-made fibre would be cheaper but much less environmentally friendly.

6. I know of people who buy a new Christmas jumper annually so the message to 'wear their favourite Christmas jumper' has failed; it also implies people should have more than one to choose from. A jumper shouldn't be just for Christmas! A more ethical approach would be to wear a favourite jumper; one which could be worn throughout the year, and people would not feel pressurised into acquiring a Christmas jumper which they neither want nor need.

I could probably come with more reasons to be somewhat disturbed by this idea (I turned down an equally daft Christmas Jumper 'opportunity' last year). In my opinion X would gain more admirers/customers if they donate what they intend to spend on this project, and tell folk what they have done and how much they have donated.

Clearly the folk who dreamt up this scenario know nothing about knitting, and I dread to think how much time and money was wasted on thinking this up. 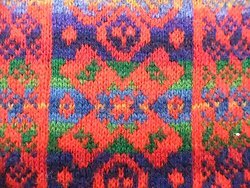 detail of jumper colours To brighten up the blog I had to search through my jumpers for a photo. This is as near as I was able to get. These colours could probably be described as Christmas-like with all the reds, greens and gold, with dark blues as a reminder of the dark skies of winter in the northern hemisphere. I call this jumper "Henry's tartan" - when it was new it was at a show where Henry saw it and said it reminded him of tartan.

This jumper was knitted a good few years ago following a discussion I had with a shop which used to sell machine and hand knit garments and accessories in Lerwick. Knitters used the business to sell their own work, with the shop taking a commission. I thought the hand knits were too cheap and were knitted quite loosely. I was told that this was what the buyer demanded, and the shop owners would really like if knitters used even bigger needles. Using yarn I already had, I knitted this jumper on 3.75mm knitting needles. It needed fewer stitches and rows so knitted up more quickly and took less yarn than my normal jumper-knitting on 3.00 or 3.25 mm needles. It looked fine but it wasn't very warm and it wasn't too long before I had to mend the elbows - it's currently waiting for more mending before I can wear it again. I was disappointed as I felt I had wasted time knitting something that was neither robust nor kept me cosy. For folk knitting for buyers they would never meet or hear from, I can understand the attraction of knitting loosely as the income from hand knitting is so low.

The patterns (motifs) used are ones I created in the 1960s when I was knitting fair isle yokes - I had got bored with the traditional patterns. One of the patterns was used in a jumper I donated to a charity shop, which was bought by Ann Feitelson and used in her book to create the Whalsay jumper. The tumbling blocks are worked over a 3 stitch repeat; it's more effective over 4 stitches.