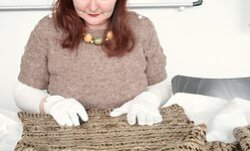 I first met Susan Crawford a few years ago when we were both visiting Shetland Textile Museum at the Böd of Gremista in Lerwick. I forget why I was there but Susan was researching Shetland knitting and studying photos of the collection and as she browsed I spotted a photo of a skirt I’d forgotten I’d knitted in the 1970s. I donated it to the museum some time after it had a close encounter with a sick child followed by an unwise adventure in the washing machine. It no longer fitted me but I’m glad I had the wisdom to keep it rather than throw it in the dog’s bed, which is how several of my jumpers ended their days. I suppose if I’d knitted a lot of skirts (I remember just two) I probably wouldn’t have kept it for eventual donation to the Textile Museum. I don't think I have a photo of me wearing the skirt; indeed I don't think I have a photo of it at all.

At the time I first met Susan I was living in my own little knitting bubble and knew very little of the knitting world outwith Shetland so I had no inkling that day of her standing in the knitting community even though she had published at least one book by then. Thinking about it, it was a bit like meeting Kate Davies at Shetland Wool Week in October 2011 – I had never heard of her either. Both Susan and Kate gave me their business cards and I soon discovered a whole new world! Since then I follow blogs by both Susan and Kate.

Since our first meeting I have met Susan several times both in Shetland and at mainland knitting events when I visited Yarndale, The Knitting & Stitching Show and Edinburgh Yarn Festival. Living in Shetland means getting to textile events is expensive and time consuming therefore I get to few and can clearly remember those I have visited. Susan’s stand is always busy as her work attracts a lot of attention and her books and yarns are very popular.

Susan is now working on another book, The Vintage Shetland Project, with the final photography shoots in Shetland this month. Through Pubslush, a crowdfunding platform with specialised focus on the literary world, Susan has launched the Vintage Shetland Project campaign which will enable the publishing of the book. Donating to the project is a way for supporters to contribute to bringing this book into being. Susan's target has been surpassed already - amazing since the campaign was launched just a few days ago. Information on how the surplus will be used can be found on Susan's blog and/or her interview on Pubslush.

Susan's new book will contain comprehensive patterns for 25 garments, many of which are Fair Isle, which she chose for special study. All of the original garments are in one of the museums in Shetland. Anyone who is familiar with Susan's work but feels nervous about attempting Fair Isle will find helpful information about knitting in general and Fair Isle in particular in my download/DVD.

Susan's book will include background information about the original garments - for me that will be particularly interesting as people are as important as artefacts, and it will be interesting to find out if I met any of the knitters whose garments were selected for inclusion in the book. 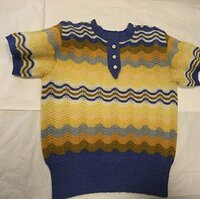 Aald Shell short sleeved top I don't knit a lot of lace but the "Aald Shell" pattern is one of my favourites, most commonly seen in "da bord" of a hap. It's a favourite as I can keep it in my head as it's so easy. It's versatile and effective when worked in two or more colours, and can be varied by having different numbers of stitches between the grouped decreases. I have used it a few times in garments, for example Jolbeth. It is fascinating to see one of the short sleeved tops Susan has chosen to recreate. It is from the 1960s and is knitted in what I call "Aald Shell" but others may call "Feather and Fan" or "Fan and Feather". This beautiful top has an attractive button fastening - and beautiful buttons too - at the neck, and shaped sleeve tops. 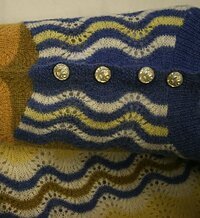 Aald Shell jumper I can see this being very popular with knitters.

It was difficult to pick just one favourite from Susan's collection so below are photos of some of my other favourites - all Fair Isle, my favourite knitting.

In the coming weeks you will be able to read about more of the items Susan has chosen and the next blogger on the tour, on 15 July, is Ella Gordon.