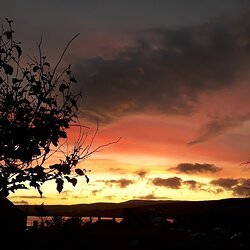 Colourful sky at 0400, 25 July For everyone spring and summer 2020 has been very different, and everyone is getting used to a new way of living. Sometimes sleep has been interrupted so I've caught some very colourful early morning skies. 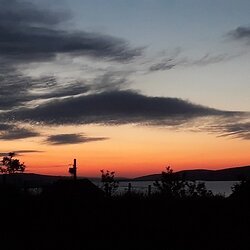 Some time has been spent knitting - no more than two or three hours a day, but not every day. Even though I could have bought yarn through mail order, I took the opportunity to use the yarn I already own so haven't bought any over the last 6 months, and I still have enough to keep me knitting for the rest of the year! I still have plenty of a few colours to knit adult garments but smaller quantities are good for gloves and hats. I'm working on an allover Fair Isle jumper as well as something from llama/silk. I've used 2 of the 5 balls of llama/silk to knit two matching oblongs but am still not sure what it will eventually become so I've laid it aside for now while I finish the jumper sleeves.

Some of my knitting is going to the shop at Shetland Textile Museum which will open for the first time this year on 4 August. Fewer visitors are expected so they don't anticipate needing a lot of stock and of course all their usual suppliers have also been busy knitting so we will all supply less than usual. I've missed meeting the groups of knitting tourists who were booked to visit Shetland and, of course, Shetland Wool Week will be a huge miss this autumn too.

I have spent a lot of time in the garden, digging parts which have never before had much attention in the 36 years I've owned it. A few years ago the New Zealand flatworm came to stay - it is neither an invited nor welcome visitor as it eats the earthworms so I can dig all day and see no worms. I regularly look for the enemy and am finding fewer, but still no native earthworms.

My plan/hope is that the garden will need less work as I grow older so I've been propogating fuchsia, veronica, berberis, philadelphus and escallonia. I failed many times to propogate holly from cuttings but was delighted to find a piece growing under the escallonia - I think it must have grown from a piece I had thrown down as mulch - so it's now been moved to a better spot, and I am again trying to propogate in the same careless way. Through the magic of social media I have been in touch with the daughter of the family who left my house circa 1950 for a new life in New Zealand. We have exchanged some photos which has been interesting - including seeing one of my 4 old sycamore trees in one of the photos.

Last week I was able to have my grandsons to stay so we enjoyed two days out - the first day on a beach and on the second we climbed Shetland's second highest hill, Scallafield. It was lovely to have the company of the boys. It's likely to be the last time I walk there as the construction work to create a massive windmill farm on the surrounding hills has started. The irreversible devastation of our landscape has begun and within the next 4-5 years there will be 103 windmills, 90 metres high, and an interconnector cable to export/import power between Shetland and the Scottish mainland. This has been planned for a while but this week it's galloping ahead regardless of how worried people are that this is not as green a solution to the need for power as we are being led to believe.