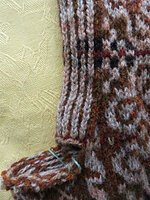 Hinnerley - underarm stitches and armhole steek Steeks are extra stitches used to enable knitting in the round - thus avoiding purling. This is particularly useful in Fair Isle knitting as it means the right side always faces the knitter and it is easy to see the pattern taking shape. The steek stitches need to be cast off in the last round and sharp scissors are used to cut open the centre of the steek for, for example, an arm opening, neck opening or the front opening of a cardigan. 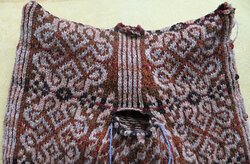 Hinnerley - front neck steek, and armhole steeks The first photo shows the underarm stitches, which have been put on to a green thread, and the steek for the armhole opening - this is a temporary 'bridge' to join the front and back of the jumper from the start of the armhole to the shoulder. In this pattern, Hinnerley, I used 9 stitches for the steek but I often use just 7. The second photo was taken after the shoulders of the jumper were joined. The steeks for the armhole openings are on the left and right and you can see the steek stitches have been cast off. The colour changes were made at the centre of the steek on the right where they were knotted together; this is why it looks untidier than the other steeks. At the centre front, neck stitches are on a blue thread and another steek was introduced to enable knitting in the round to continue. Decreases were worked at the sides of the steek to shape the neck.

Hinnerley - after neck was finished

When using Shetland wool there is no need to secure the steek before it is cut open. To finish off the cut edge stitches are picked up and knitted from the adjacent steek and body stitches; the steek naturally curls to the back of the work at the right place. I like straight lines for the steek so that it is easy to find the place for picking up the stitches. I prefer to use a thin knitting needle for this and to pick up a stitch for every round knitted and follow that with a decrease round. I believe that is the neatest method. For this neck I knitted rib in two colours for the length required then finished it off with one colour rib which was folded to the inside and slip stitched to the start of the neck rib. This gives a neat neck finish and avoids having to get the cast off tension just right - one of the most difficult things to do. With this method the cast off is quite loose and unseen as it is on the reverse of the jumper.

I was recently asked why I did not steek the ribs on Shetland Star cardigan or use a steek for the whole body of Hamnafield yoked cardigan (I used a steek for the Fair Isle yoke only). Steeking when knitting with one colour was not something I had encountered when young, and it is only recently that I discovered this is not an uncommon practice. When planning these two cardigans it never occurred to me that steeking might be a good idea! I gave it some more thought and came up with more reasons. One is that it is very easy to twist a cast on, especially when using a circular needle. Another reason is that I don't like to knit more stitches - or use more yarn - than I need to. Steeked ribs at the hem and neck of Shetland Star would not have been a lot of extra stitches to knit. On the other hand, if Hamnafield had a steek of 9 stitches for 106 rows (more rows on the bigger sizes) before the start of the yoke that means knitting 954 stitches, plus the rows above the Fair Isle yoke. Apart from the extra yarn that would require there is also the time to consider - knitting these steek stitches would be about 20 minutes (averaging about 50 stitches a minute) which is not too long. However when knitting a steek with just one colour of yarn I think I might want to secure the steek stitches with either crochet or machined stitches which would take more time. Another reason is that it takes me longer to pick up stitches from the edge of a steek than it does from the edge of a flat piece of knitting, and thought needs to go into figuring out how many decreases to work after picking up from the edge of the steek.

There is nothing to stop knitters adding a steek to one colour knitting but I don't think I'll be going to change the habit of a lifetime!