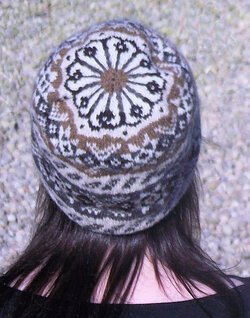 Shwook hat When I was asked to be Shetland Wool Week’s patron for 2014 I was invited to design a pattern. We discussed the possibilities and agreed upon a Fair Isle hat, which could be knitted over the summer then worn during Shetland Wool Week. A hat is not too difficult, nor too big and wearing a hat will identify fellow Wool Week enthusiasts, and is likely to be a means of starting conversations between those who share a common interest.

The hat is knitted from Shetland wool so is lightweight and will keep hair dry if it rains. It's also long enough to pull down around the face to keep it well anchored on a windy day. For those travelling a distance - we expect visitors from Australia, Canada, Chile, USA and many other countries - the hat will take up very little luggage space.

I have knitted many hats over the years. Some of these were quite complex and writing the pattern would be too challenging. I knitted a few hats before finalising the pattern to write. I chose a slouch hat which, I think, suits most people as there are different ways of wearing it and there is plenty of room for those blessed with lots of hair. I also give instructions for a smaller, more tightly fitting hat which might be preferable to some people.

In case you think the shape at the crown of the hat is familiar, it is the same as the centre of my Scaddiman cushion cover.

I’ve been asked how I decided on the name for the pattern. Shetland dialect words sometimes help me find pattern names (eg Scaddiman, Ponni, Starn), and I also use the names of people (eg Alicabel, Hinnerley, Jolbeth). For Shwook I didn’t explain in the pattern as I thought people would guess that it came from Shetland Wool Week. I find people are now asking if it is a dialect word which could describe a slouch hat. As far as I know it is a word I made up.

It would be pretty boring if many Shwook wearers appear in Shetland in October wearing the hat in the same colours so I give 3 colour suggestions in the published pattern, and there are more photos below. I hope this will provide inspiration for knitters to choose their own different and individual colour combinations. Shetland Wool Week’s Facebook page has already got photos of hats knitted in different colours. They are all lovely but I really like Elizabeth Johnston’s version in yarn she has handspun and dyed. Her hat is beautifully knitted too and on her blog she shares dyeing information and the adjustments she made to compensate for her slightly thicker handspun yarn.

Of course I will be looking for the hats over the summer months but in October I look forward to seeing a coruscation of Shwooks, especially at the Opening Reception. Very soon after the free pattern was launched over 800 copies were downloaded. I expect more copies will be downloaded over the next months so, though not everyone will knit the hat and be there, to see even a small percentage will be stunning.