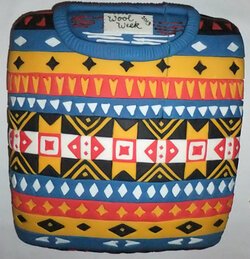 Cake made for Wool Week 2013 by Gwen Sinclair I am delighted to have been invited to be patron of Shetland Wool Week 2014, the first Shetlander to be patron, and following in the footsteps of Kate Davies and Felicity Ford. I first met Kate in October 2011 when she attended a Fair Isle workshop in the Breiwick Cafe at Eshaness - at that time I had no inkling as to how influential she is in the knitting world. I met Felicity in August 2013 when she came to record the sounds of me knitting. When Felicity gave her lecture at Shetland Wool Week 2013 these sounds were juxtaposed with the new tune, "The Gansey" by Thomas Stove, which was inspired by his mother's knitting needles. This is the nearest I will ever be to musical performance!.

In 2014 activities begin on 4 October and end on 12 October so it is a long week, with interesting things going on all over the islands. I love the whole buzz created by wool lovers as they meet to share, discuss, learn and enthuse about wool. Of course visitors also enjoy seeing the landscape and it is always good to see all the photos posted on various sites. Already I notice people discussing their plans for wool week on Ravelry. Through this online networking in other years people have arranged to share cars and accommodation so keeping down the cost of their trip, and I am sure many lasting friendships have been forged.

I am looking forward to wool week and hope to meet old friends as well as new. 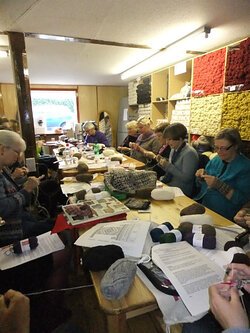