Shetland Guild of Spinners, Knitters, Weavers and Dyers held their April meeting in the auditorium at Shetland Museum and Archives. There were three speakers, pictured below: left to right Carol Christiansen, myself and Helen Whitham. 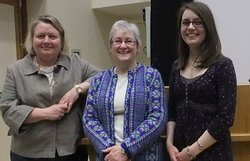 I was the first to speak, presenting to a Shetland audience the paper I gave at "In the Loop 3" knitting conference in Winchester in 2012. My subject was "Knitting in Shetland in the 1960s" through the words of Chrissie Sandison (my mother) who was born in 1917. She was a mother and crofter who knitted to keep her family clothed and she had to sell knitwear to make ends meet; there was no other source of income. She did not enjoy knitting and much preferred reading and writing yet her diaries between 1961 and 1969 contain many references to knitting.

She always regretted that she did not keep a diary before 1961 so she recorded many memories of earlier times and her book "Slyde in the Right Direction" was published by The Shetland Times Ltd in 2008, a year before she died.

In the photo I am wearing a cardigan similar to one she knitted for me in 1962 - I have the original, well worn cardigan, a photo of me wearing it, and the diary entries detailing when it was started and finished. I intend to donate the 1962 cardigan to Shetland Museum in the near future.

Dr Carol Christiansen, Curator with Shetland Museum, spoke about the research she is doing regarding Shetland's tøvacuddies where early weavers used the power of the sea to full their woven cloth. She brought two pieces of weaving which had been fulled last year, along with samples of the same cloth before being fulled, and after being fulled by hand. She has visited most identified tøvacuddies and is keen to hear of others. She would also be delighted if anyone has a length of weaving they would like to have fulled in the sea. 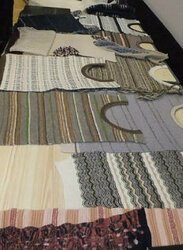 The afternoon speaker was a young Shetlander, Helen Whitham, who graduated in 2012 from Duncan of Jordanstone College of Art and Design, Dundee with a BDes (Hons) in Textile Design, specialising in knitted fabrics.