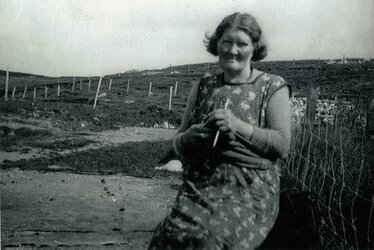 The three adult ladies in the house knitted six days a week - Sunday was always a day of rest - and knitted at every opportunity. For my grandmother it was something she had had to do all her life. For my aunt it was her only source of income, and her aim was to knit enough to buy a 'stamp' - National Insurance payments - to ensure she would qualify for an old age pension (she did). For my mother knitting was no pleasure - it was a way of keeping her family in warm clothes, and represented the struggle to earn some cash.

Throughout the 1960s work in Shetland was scarce and hundreds of Shetlanders earned income from machine and hand knitting. Many of my contemporaries recall being lulled to sleep with the rhythm of a knitting carriage being pushed back and forth as a parent knitted some more 'bodies' - the plain parts of jumpers and cardigans. Thousands of these bodies were destined for hand knitters who added Fair Isle yokes, grafted on cuffs and necks. Others were knitting whole garments, with 'finishers' employed to graft on cuffs, necks and other tasks to produce garments ready for washing. Many business were involved in the export of knitwear, and school pupils had the opportunity to get machine knitting tuition.

Knitting in almost every home in Shetland was common until the mid 1970s when the knitwear market shrunk and the oil industry came to Shetland. Women were able to find work outside the home where they probably earned more and enjoyed working in the company of others at the same time. Many knitting machines were stored in lofts and hand knitting became much less common.

Machine knitting instruction in schools dwindled, though it was still taught in Aith School until about 1989. Hand knitting instruction in all of Shetland schools stopped in 2010. Since then it has become increasingly clear that, while some people can and do pass on the skills, there is real danger that the techniques of Shetland knitting will be lost. This is why ShetlandPeerieMakkers came into being. Finding a name for this project was not too hard: peerie is the dialect word for small and to makk is to knit. Crowdfunding is being used to raise funds needed to launch 5 pilot projects to teach hand knitting to Shetland youngsters. The initial target of £4500 was reached in 16 days and the target is now £9000 which will mean more opportunities for children to learn. Crowdfunding ends on 11 December.

Last week I was at a meeting with some of the volunteers. Now that sufficient funding has been raised the first pilot projects are underway.The volunteers have so much enthusiasm for this project, and all were smiling. They spoke about how rewarding it is to work with children who want to learn and excited about the progress they are making. One tutor spoke about the benefits of having older knitters join them and the joy of conversation between teenagers and much older ladies as they discussed colour in Fair Isle knitting. The children have their own folders for keeping written materials and have knitting belts to use. Jamieson's of Shetland supplies the yarn they use. The tutors use dialect words when speaking about makkin - geng, riggies, sweerie geng, raas, loops, spret, intaks, kemp, kloo, right loops, wrang loops, wires, wirsit are some which are commonly used.

Apart from the photo of my grandmother, the other old photo used in the Crowdfunder film shows three of my aunts with two of their neighbours. I gave copies of both these photos to Tangwick Haa Museum at Eshaness for the ladies in the photos were all born and brought up in Northmavine, Shetland. My dad's family moved from Northmavine in 1932 so I'm fairly sure the photo was taken while they still lived at Orbister. From the volunteers at Tangwick Haa I learned that the photo had been taken by Mr Cadbury who was on holiday at St Magnus Bay hotel. For many years afterwards a box of Cadbury's chocolates was sent to Mary Sharp. I also gave a copy of the photos to Shetland Museum and Archives.

The ladies are holding their kloos on their little fingers, and none is using a makkin belt - Northmavine knitters generally didn't use them, and they knitted with the yarn in the left hand. I have a recording of another aunt, Mary, who said she had been told that a shipwrecked German sailor had introduced the Northmavine knitters to 'continental' knitting but she had no more information. All have their knitting stabilised at their left sides. 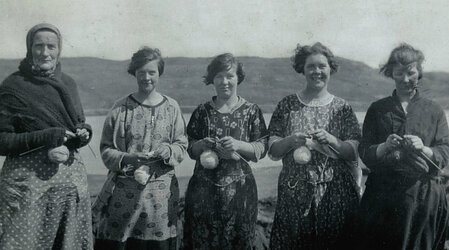