Left over balls of yarn

I have a huge quantity of small balls of yarn left over from projects. From time to time I gather these together and make myself knit things which will reduce the quantity. It's always enjoyable, and often challenging, and sometimes leads me to ideas for designing things for which I can write patterns.

In spite of having plenty of yarn already I bought a big bag of Shetland yarn at an auction sale and some of that purchase went into making this jumper. 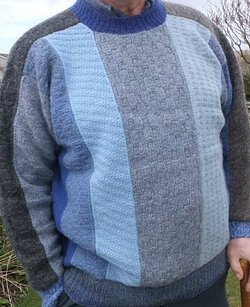 sampler jumper I decided to combine knitting a sampler with using up the auction sale yarn which came in quite small balls, mostly in shades of blue and grey. Each strip of colour is worked in a different pattern. At the same time I wanted something functional at the end of all this knitting.

I doubled the yarn, using one thread from the middle and one from the outside of each ball. This made it easier to estimate if I was going to have enough to knit the strip - if I felt I would run out I replaced one thread with a similar colour, so any colour changes are very subtle and difficult to spot. As I went on I found it easier to gauge how wide and long a piece I could get from each ball of yarn. I also had to give some thought to how the colours of the stripes would balance.

The samplers were knitted into long strips, shaped according to where they would eventually fit. Many years ago I learned a lot from attending a tailoring class so I think that probably helped me with this complicated design. 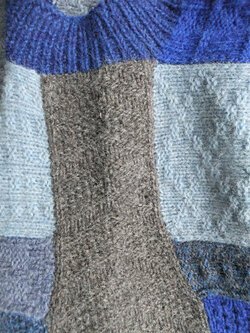 shoulder top of the sampler jumper

The strips for the outside centre of the sleeves were extra long, going from cuff to neck, with shaping for the shoulders.

To join the pieces I picked up stitches from the edges and grafted them together. This makes a good flat seam.

Knitting the jumper in this way meant I was able to put a more textured strip of knitting where the elbows are, hoping to delay the time when darning is needed. 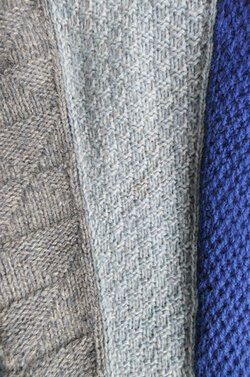 the sleeve shaping was done on one piece 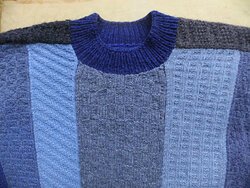 front neck of the sampler jumper There is no chance of me ever writing the pattern for this jumper. I am pleased I did it but to write the pattern would mean starting all over again as I made no notes at all.

I recently looked at my latest pile of "peerie clews". This lot weighed about 1700 grams. 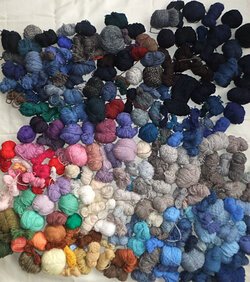 collection of small balls of yarn I sorted them into colour 'families', then put each 'family' in a clear plastic bag. For the photo the dark colours are at the top and light colours are at the bottom. These are some of the colours I used to knit some cushion covers using the patterns from this website.

All of my cushion cover patterns are perfect for using up small amounts of yarn. You just need to remember that if you use dark colours for the background you need to use light colours for the pattern, and when changing colours try to make sure the new colour is roughly the same 'value' (strength of colour) as the one it is replacing.

This is Scaddiman which you will find in the "Buy Patterns" section. 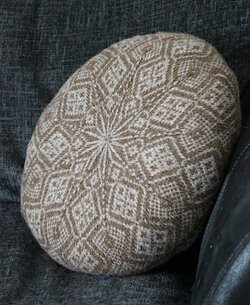 Scaddiman in 2 colours Changing the colours totally changes the appearance and you have to look closely to be sure they are knitted from the same instructions. These are two versions of Scaddiman. 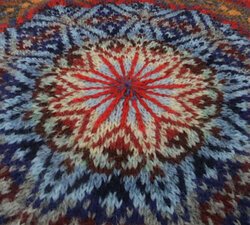 Scaddiman in many shades of blue I wrote the pattern for just 2 colours but adding some more makes a big difference. For both of these I mostly knitted until the colour ran out then replaced it with another. I have acquired a huge quantity of blues, but the subtle changes of shade makes for a very interesting cushion cover.

I avoided replacing both background and pattern colours in one round.

I tried the same with Starn, another of my patterns which has just 2 colours. 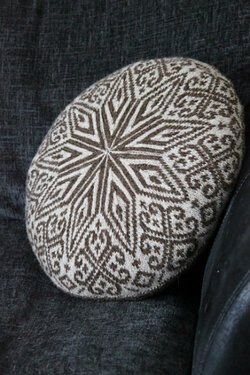 Starn in 2 colours I used lots of colours for this version which has a lovely bright centre.

The Kolla cushion cover pattern has a few colours. It 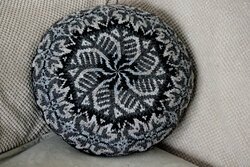 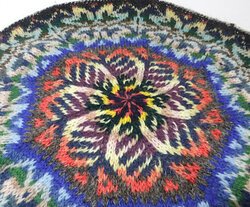 Kolla in many colours looks different in other colours.

One person tells me Maristi reminds her of a butterfly so she knitted a version to emphasise that, and I tried to do the same, and also changed the background from dark to light.