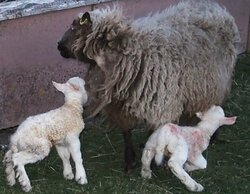 twin lambs born on 1 May 2013 My younger sister now lives on the croft where we grew up.

Her lambs are arriving now so I visited to see how she's getting on. At lambing time she is likely to be getting sleep when she can so I don't like to phone in case she is catching some sleep.

The weather is not ideal for lambing out doors with strong, cold northerly wind, and heavy hail showers - poor conditions for ewes in labour and their new born lambs. Several ewes choose to lamb near the burn (stream) as they are happy to have found shelter but are unaware of the danger of fast flowing water nearby. Close watch is needed to make sure no lamb slithers into the burn for it would be unlikely to get out by itself so drowning is a real danger. Also, a lamb which has fallen into water can be rejected by its mother. Any ewe in difficulty during lambing is soon noticed by predatory birds (black backed gulls, great skuas, and crows) - their attendance means the loss of lamb and possbily the ewe too so the humans must keep a watchful eye.

After lambing the new family is moved to a small park where they can be watched from the kitchen window, to make sure all is well, before they get moved to the post natal area. Triplets had arrived earlier in the day so these were indoors getting shelter and warmth; for some reason this mother has taken a dislike to one of her lambs whose perisistence in attempting to get milk never waned in the short time we watched. They will be closely watched over the next hours.

When I was a child the sheep were all on the hill as the 'in bye' land was used for growing crops. The nearest we got to seeing a new born lamb was the early evening walks up to the hill with our aunt, Annie. We were hoping to find lambs which couldn't run faster than us. Annie would use her binoculars to check that it was one of 'our' ewes by checking the identifying marks in the ears. Each croft used different ear marks which were made by using a sharp knife; usually this was done when the sheep were rounded up for clipping (shearing) in July. On our forays into the hill at lambing time our job was to catch the new born lambs and hold on to them while Annie used a sharp needle, threaded with two lengths of yarn in different colours, to push through the lamb's ear. A length of coloured yarn was left in the ear and knotted so it wouldn't come out. When these lambs were rounded up it meant that the permanent marks could be made without waiting for them to attach themselves to the correct mother - something which always takes a while when scores of sheep are herded together. None of us can remember if the same colours of yarn were used every year. I think Annie had two needles with different coloured threads so that she could also temporarily mark our neighbour's lambs for him. Needless to say, not every lamb was caught and some crofters didn't get ears marked with threads so there were often grumblings about men putting their own marks on whichever lambs they wanted. Once the permanent mark was made there was no arguing over who owned that lamb. Nowadays, thankfully, paint is used to identify lambs, and adult sheep carry coloured tags in their ears, each with an identifying number.