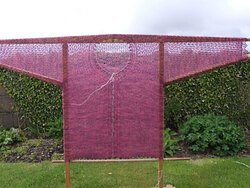 Inverriples cardigan on jumper board Posting this photo on Facebook and Twitter raised some questions about whether I would write the pattern – and about jumper boards. The reasons I will not write the pattern are below! Lace knitting is not my first love so my experience is limited and with some planning I would have constructed this differently, and would have made notes as I knitted (and remembered I’d made them) ........ and I would have knitted a tension swatch and used fewer needle sizes!

Knitting this cardigan took many hours – there are 106 peaks of the lace pattern around the edge of the cardigan, plus 9 at each cuff. Each peak took about 3½ minutes (once I’d learned the pattern) to knit. I have no idea how long the body took to knit but managed the sleeves in a couple of days as I saw the end in sight.

When I went to Ganseyfest in Inverness in autumn 2011 I found a few stalls selling yarn. I couldn’t resist buying a hank of 70% Alpaca, 20% Silk and 10% Cashmere from Helen at Ripples Crafts. This gave me the name for this project. I bought another hank of yarn from Helen at Edinburgh Yarn Festival so that will have to become a perfect garment and written pattern, Edinripples!

When I started knitting with this yarn I had no idea what it would become. I started with 2mm double pointed needles and knitted a long length of Vandyke Border (from The Art of Shetland Lace by Sarah Don) – it’s a 12 row repeat and the stitch number grows from 7 to 14, and back to 7 to give a triangular shape – in Shetland we call this “da lace” and each repeat makes a peak. I used a provisional cast on as I was pretty sure that I would ultimately want to join it to the end of the lace. Over many weeks I kept adding to the repeats, marking every 20th one by knotting a coloured thread through one of the holes. After I had got 80 repeats I left it for a while till I decided what to do next.

A long time later I was looking for some knitting to take on holiday and this, with a circular needle, seemed ideal. I picked up and knitted stitches from all of the straight edge of the lace and knitted a few rows back and forth. As soon as I knitted a row with yarn overs I discovered that I spent more time encouraging the stitches over the join between flexible and inflexible parts of the circular needle than I did knitting. I did very little knitting on that trip. When I got home I contacted the manufacturer and was sent a replacement needle but in an accompanying note the sender said she thought the new one might give me the same trouble. She was right. 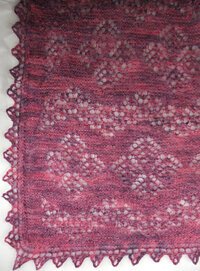 The bottom front of Inverriples cardigan

It was many months before I picked this up again. Uninspired by what I had done on holiday I “spret” (Shetland dialect word for rip back) till I reached the straight edge of the lace. I decided this would perhaps become a short bolero. I measured the lace and calculated that 50 peaks should be the right width, but not too tight. I picked up 480 stitches from the straight edge, using 2.75mm double pointed needles. I started to knit over the middle 300 stitches using the pattern in chart B of Mary Kay's Vinstrik from 'A Legacy of Shetland Lace' but added a plain (knit) row between all the pattern rows of the second pattern. I attached the remaining lace on to the main part by knitting the last stitch of the body with the next stitch picked from the edge of the lace. I kept going until the remaining yarn weighed 55g and the lace edging ran out.

It was time to stop again as I tried to figure out how to knit the lace edging. Unlike many experienced lace knitters, I am unable to look at complex lace and see how it was knitted. I could have taken back one repeat and written it down as I went but that would have meant taking back 12 rows of the body too. Another lesson learned; I should have stopped knitting as soon as I realised I needed many more inches of lace.

If I had remembered that I had, unusually, put some notes on my Ravelry page I would have saved a lot of time! Instead, after a bit of searching, I found the book with the edge pattern instructions. I started to knit more edging but I used 2.75 mm needles before realising the edging had been on smaller needles. At least I’d only knitted two repeats before I noticed.

Eventually I got lots more edging knitted and returned to knitting the body - but the needles had been needed for something else and the stitches were on a stitch holder. Once again I had forgotten that I had made notes on Ravelry and forgot which size needles I’d been using. Somehow I decided it had been 3.00 mm so finished the cardigan on slightly bigger needles. 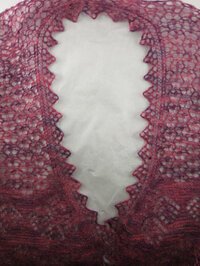 Front of Inverriples cardigan I put 19 stitches on hold for the armholes, and knitted one front to the shoulders with V neck shaping and some shaping at the armholes. By this time I had got weary of the complexity of keeping the patterns correct and opted to continue the second pattern of chart B without the complication of making a wave. This makes the top very lacy and I took a while to learn the pattern. 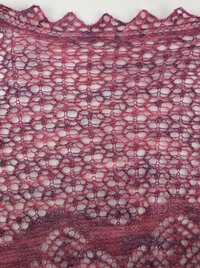 Back neck of Inverriples cardigan Next I knitted the back then calculated how many more repeats of the edging I’d need to join to the back neck and for the side of the other front to meet the provisional cast on at the start of the lace. After double checking all this I grafted the end of the lace to the provisional cast on, so making a circle of lace. Stitches were picked from the straight edge and I knitted the remaining front to the shoulders. All stitches were kept on hold while other parts were knitted – the circular needle was useful for this, with rubber bands wrapped round both points to ensure no stitches were lost. The shoulders were grafted together and the back neck lace was grafted on too.

I weighed the remaining yarn and decided I had enough to knit sleeves too. I was eager to see how it would look when stretched so I washed and put what I had knitted on to a jumper board – this, belatedly, was my tension swatch! Prior to that I had blocked three repeats of the edging to establish that the yarn holds its stretch. Of course I would never recommend knitting so much without checking the tension but this was freeform knitting, even though I had never used this yarn before. I put strong cotton thread through all the triangle points around the neck and whip stitched the fronts together to make a tube to go on the board. I forgot to take any photos. Once it was on the board I sewed the peaks round the bottom dowel. It stretched a lot.

Once it was dry and I could try it on to confirm that the armholes were too long. By measuring the top of the body I was able to calculate how many repeats I would need for a sleeve, and how many stitches at the top and bottom of sleeve. From that I knew how much shorter the armholes needed to be. I picked up the live under arm stitches and knitted a garter stitch gusset, knitting the last stitch together with the edge of the armhole to close the gap. There was some shaping at the sides of the armhole but that proved a good way of pulling the cardigan in after I had switched needle size from 2.75mm to 3.00mm, and it means the lower part is a little wider than the top. 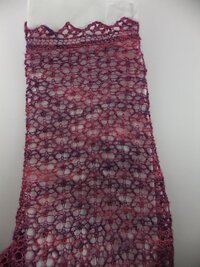 Inverriples sleeve Once I’d shortened the armholes I picked up stitches from the armhole edge for the sleeves. Now I had two choices. I could knit the sleeves in the round on double pointed needles but that would mean purling alternate rounds to match the body. I opted for the other choice, to knit the sleeves back and forth. At first I knitted just a few rows of garter stitch using a circular needle until I could get all the stitches squeezed on to a long double pointed needle. The sleeves were knitted from the top to the cuff, As I reached end of second sleeve I realised I had wound yarn over a 'peerie kloo' (a small ball of yarn) so I actually had less yarn than I thought. I was glad I had left the first sleeve stitches on hold before I added the border as I had to take back 12 rows on the first sleeve to make them match. Just as well I have short arms! The underarm sleeve seam was joined by whip stitching the edges together, making sure it was not too tight. I then I grafted 9 repeats of the Vandyke border to both sleeves.

Inverriples cardigan worn for the first time! Having re-read this, it is surprising that it turned out so well. It's not perfect but I am very pleased with the finished - reversible - cardigan, and have been asked if I will publish the pattern. For all the reasons above, I have no plans to do so!

My new yarn from Ripples is in a single colour which will show off whatever pattern I knit, and the construction will be a little different. I will even knit and stretch a swatch before I start! Whenever I do that I will write the pattern too - but I do have other yarns in the queue.

Chapters 22 to 25 of my DVD/download show in detail how to prepare a garment before it is washed, how it's put on the jumper board, and what to do after it's taken off the board.