Dornoch Fibre Fest started on 15 March with a very interesting talk by Dr Susan Kay-Williams who is the Chief Executive of the Royal School of Needlework based at Hampton Court Palace. She spoke about the work of the Royal School and showed a large number of photographs of needlework, which illustrated a variety of techniques. She was introduced to dyeing in the 1980s; this led to her writing a book, "The Story of Colour in Textiles", which has just been published. So far I've just looked at the pictures. 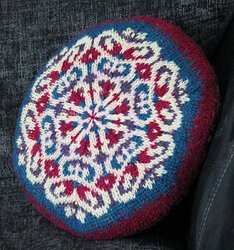 Maristi Cushion Cover I was there to deliver two masterclasses on Fair Isle knitting. The first day was hats - a simple Fair Isle hat (Kyukker) or a more complicated baby bonnet (Valentina). Those who were knitting Kyukker chose their own colours. Day two was cushion covers, the easier Dornoch or the bigger Maristi, and they all chose their own colours so every one was different. The patterns for Kyukker, Valentina and Dornoch will be on my website soon.

There were two other masterclasses: Ewa Kuniczak (felting) and Floraidh McPherson (rag rug making). I was kept too busy to go visit their classes but saw some of the things the participants had started to make. Sadly there was little time to have a proper browse of the vendor stalls. Everyone left with a smile so I guess Dornoch Fibre Fest was a success again.