Dolphins, Porpoises and a Basking Shark 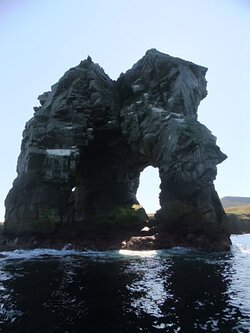 Da Gaada Stack Dolphins, porpoises and a basking shark were all seen on Wednesday 27 August as a group travelled from Scalloway for a day trip to Foula on MV Cyfish. We had calm seas, a light wind and an almost cloudless sky - perfect conditions. The last time I travelled this way to Foula the weather was cold and misty so we didn't see the island until we were nearly in the harbour. Flying is a much quicker way to get there but I think it's not quite as enjoyable. I have not travelled to or from Foula on the ferry which is used for passengers and freight - maybe next year.

Foula is about 20 miles west of Shetland Mainland and the distinctive shape is a familiar sight on the western horizon, and is something I often gaze at when out and about in Shetland. 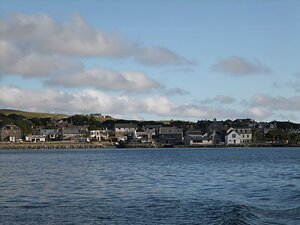 Leaving Scalloway John Tulloch is the skipper of Cyfish and, apart from charters for fishing and other work, makes this weekly trip to Foula over the summer months, when weather permits. The boat trip from Scalloway to Foula takes about one and a half hours, and we slowed down a few times to watch dolphins and porpoises which John had spotted near the boat. These are not easy to photograph as you don't know where they will next appear so I didn't try. Sometimes it's better to enjoy the spectacle than lose the fleeting moments while fiddling with a camera. The basking shark appeared as we motored slowly and quite close to the Foula cliffs.

The programme for the day is to stop briefly at the pier to pick up Jim Gear who is guide while the boat circumnavigates the island, then have time for a short walk. Jim has a wealth of knowledge of all things to do with Foula, from geology to exploits on the cliffs, and all things in between. The other time I took this trip it was windy and misty so we started with a walk on the island and finished with circumnavigation as the weather had improved a little, and Jim wasn't available. I learned much more this time - if only I could remember it all. Circumnavigation gives close up views of the cliffs, and on this occasion, conditions meant we were able to get really close, and into the back of Da Kame (376 metre sheer drop). John reckoned it was about 10 years since conditions were suitable to take the boat into that particular inlet. Photos fail to show the enormity of the cliffs and the overhang - but the GPS let us know that the signal had been lost. Neither can they convey the smell from the seabirds, or the noise.

It must have been nearly two hours later that we returned to the pier for a welcome cup of tea or coffee before going ashore to enjoy a walk around the island. Sheila Gear was available to give a short guided walking tour but I had arranged to meet Magnus, the man behind Foula Wool - more about that in another blog.

I took many photos of the trip but have selected just a few to share.