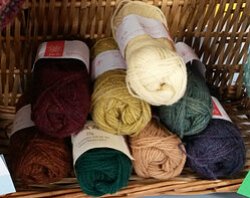 8 colours for 2015 J&S Colourbox competition For a few years Jamieson & Smith have been sponsoring 'Colourbox Challenge' competitions at Voe and Cunningsburgh Shows. Eight colours are selected and the challenge is for knitters to create pieces of Fair Isle using at least 4 of the colours (I was told that it was 5 for Voe but one of the stewards told me that was not specified in the show schedule, and 4 for Cunningsburgh) and enter their creations in the Shows.

The colours are rarely ones I would choose, and not ones I would plan to use together in one garment! However it is a real challenge to see what I can be create with them, and even more interesting to see what others have knitted. I was really looking forward to seeing the knitting at Voe but the Show had to be cancelled as the fields were too waterlogged to support the necessary marquee tents and parking would have been a problem too. The bonus is that this year all Colourbox entries were taken to the Cunningsburgh Show. Visitors were treated to a bigger than usual display of colourbox creations as entries to both Shows were judged and displayed at Cunningsburgh.

The entries for both Shows were displayed separately but not far from each other. We were able to look at both groups and see so many different ideas. You can find more photos on Jamieson & Smith's blog.