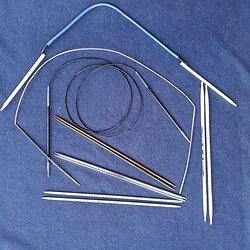 Circular and double pointed needles I dislike circular knitting needles - I've known that for a long time. I am often asked why, so I have spent some time trying to analyse what it is I don't like. I have several circular needles, mostly fixed cords and one set of interchangeables. The circulars are not often used but are useful for keeping stitches on hold, and sometimes for making stitches at the edge of a steek.

The advantages of using a circular needle are that you never lose the needle and it makes a more portable project. Also, when knitting in the round with interchangeable needles, it speeds the knitting if a thinner needle is on the left; this reduces any delay in stitches moving from the cord to the needle and you knit into a big stitch. 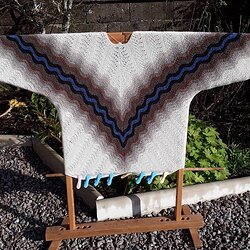 Cardigan - back view - on a jumperboard cardigan in the photo started as 4 triangles, following a construction method I'd used before. Eventually I had over 900 stitches in a row, and realised a long circular needle would make it easier. I bought a 100cm needle which I used until the stitch number decreased enough to make long double pointed needles, with a knitting belt, an option. It's possible to squeeze about 400 stitches onto a 40cm straight needle (depending, of course, on the thickness of the yarn). When using the circular needle I had to adjust my hands/stitches every 20-25 stitches as the newly knitted stitches bunch up when they approach the start of the cord making it impossible to make more new stitches. When knitting on the long double pointed needles hand/stitch adjustments were made every 45-50 stitches. The adjustments I make are to squeeze together the stitches on the left needle so that they are ready to be fed towards the point, and to spread the stitches on the right needle to make space for the new stitches. When using straight needles the stitches on the left easily glide towards the point - there's no cord/needle join to slow them down - and on the right the stitches are easy to slide along the straight needle rather than curving towards the cord of a circular needle. A bit like driving, the curves in the road, no matter how gentle, slow you down. 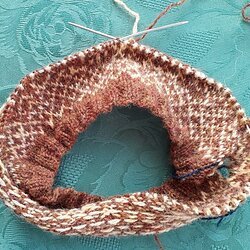 Fair Isle on circular needle Later I used the same long circular needle for knitting with two colours - using what is commonly known as the 'magic loop' - to knit in the round. Magic is, I think, an inapporpriate adjective to describe this method of knitting in the round. I have watched many people knit this way and it seems a lot of time is wasted when moving the loop, but I suppose it gives the knitting fingers a short rest. What I noticed with Fair Isle was that I had to take extra care to ensure the floats were not too tight. On straight needles, where the floats are over no more than 4 stitches I do not worry about tightness but I found when using the circular that I constantly had to check. The distance from needle point to start of cord is comparatively short so the stitches soon begin to curve around the cord. This can tighten the stitches and makes it hard to judge if the the floats are long enough. Now I understand why knitters have so much trouble with tight floats; one answer is to knit with the cord between your body and hands so that the floats are going outside the circle. An alternative is to use two circular needles back to back but the challenge is keeping tension correct where the needles meet.

In 2011 I was asked to knit two identical jumpers using 2 strands of Jamieson & Smith aran weight yarn and thick needles - 8mm. It was a single colour garment in an allover honeycomb pattern. I hate working purl stitches and seaming, so decided it would be better knitted in the round. I have no 8mm double pointed needles - I am not sure if anyone ever made those - so I had to use a fixed circular needle. I did not enjoy knitting this - the colour didn't help - and my abiding memory is the discomfort I felt in my hands, especially my left thumb. With circular needles there is no way of taking the weight off your hands - and this was a very heavy garment. (When using double pointed needles I can use a 'raepin string'.) 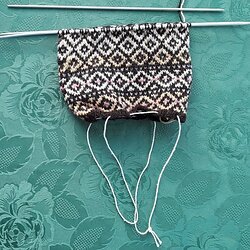 Another reason for preferring long straight needles, a knitting belt and raepin string is that I control the knitting - nothing moves unless I want it to. With a circular needle the piece of knitting moves; it seems to me that the cord wobbles all the time. When I was a youngster, watching the expert knitters in our house, and neighbouring houses, I noticed that the knitters sat with their backs straight, in a very upright posture - you knit more quickly like that, and these knitters needed the income from their knitting. Maybe it's my imagination but it seems that knitting with a circular needle seems to encourage a rounding of the shoulders, especially with a bigger piece. A cushion to lift the bulk a little higher would help.

Many knitters complain of pain but it's not something that troubles me. However I do know my hands will be uncomfortable after using a circular needle. The other time I noticed discomfort was when I was using thick needles (bigger than 4mm), doing knit and purl in a row at irregular intervals - working rib is fine but constant irregular switching between knit and purl left my hands aware that they'd been exercised.

For anyone interested in avoiding discomfort/pain when knitting, the book "Knitting Comfortably - the Ergonomics of Hand Knitting" by Carson Demers may be of use and you can see him interviewed on this Fruity Knitting podcast. June Hemmons Hiatt, in her book, "The Principles of Knitting", looks at supported knitting too.

I have tried square needles, wooden needles, bamboo needles, Prym Ergonomic needles (both circular and straight) and interchangeable circulars but I continue to reach for my straight double pointed needles - many of them many years old. Steel needles are the best - they don't bend and there is a satisfying click as the stitches are made. The surface of the needle is important - I like a really smooth needle - but I often find that new needles (and crochet hooks) have a slightly rough surface which makes using them more challenging. As they are in sealed plastic bubbles there's no chance to feel them before buying.

When using circular needles I have had trouble with stitches crossing the join from cord to needle, especially when knitting lace with thin yarn and thin needles. I've had interchangeables come apart as I knitted and I've had the brass tip of a circular come loose enough to slide back and forth to trap stitches as I knit.

During Shetland Wool Week I've held classes to give people a chance to try using a knitting belt with and without a raepin string. Many knitters go on to knit this way, keeping their circulars for portable projects.

Finally, you might be wondering about the knitting on the needles. Both these pieces are kept for when I need to demonstrate during workshops so I knit whatever I'm asked about - it might be how I tension yarn, hold two colours, catch floats or some other thing. I have also partially cut them so people can clearly see how straightforward and safe it is - when using the right yarn.