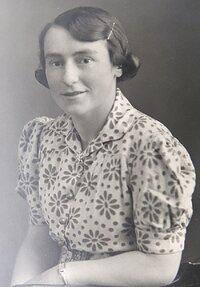 Chrissie Sandison aged 23 A hundred years ago, on 9 November 1917, my mother Christina Barbara Josephine Sandison (nee Anderson) was born. She was the youngest of 8 children - there were more pregnancies. Her mother was 44 when she gave birth so my mother always said she was 'da scoor da buggie' so they gave her all the names they had left - in those days it was usual to name a baby after someone. Christina was after her father's brother Christopher who was to become her favourite uncle, Christie. Barbara was after a family friend and Joseph was another of her father's brothers - he spent most of his life in South Shields so she rarely saw him. She also said that the weight of her long name hindered her from growing tall.

In August 1919 her mother died of Chronic Bright's Disease (kidney disease). Her mother's widowed sister, Helen, and her son Peter were already staying in the house so 'Auntie Ellen' became her surrogate mother. Ellen was a hard worker who helped on the croft and knitted in order to contribute to the household; there was no widow's pension. 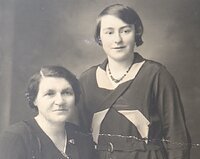 Ellen and Chrissie circa 1934

In 1920 when her brother Bobby married, her new sister-in-law joined the household. Their 3 children, born between 1921 and 1928 were like younger siblings.

My mother recalled that there was always knitwear on needles and being 'dressed' on boards before it was taken to a shop to be exchanged for groceries - the truck system continued in Shetland up until the start of World War II. She was encouraged to knit too and remembered knitting a 'cradle baand' - a long narrow strip of garter stitch used to zig zag across the top of a cradle. As she grew older her preference was to read a book. This exasperated Ellen who was forever encouraging her to knit as that would be the only possible way for her to earn anything.

In 1929 tragedy struck when two of her brothers, on their way to exchange knitwear for groceries at the local shop, were drowned when their boat capsized. The parcel of knitwear, carefully tied up in brown paper, floated ashore. Knowing what it would be, and how valuable it was, neighbours rescued it and it was my mother's job to fetch it back. Her other abiding memory of that time was someone coming to dye all their clothes black.

In spite of hating the feel of steel needles, she became an expert but somewhat reluctant knitter. I have read through her diaries from the 1961-1969, by which time she was a mother of four. It is clear that the struggle to find time to knit, coupled with the frustration of sometimes failing to sell the knitting, made for a very hard life. There were always bills to pay and there was no other way for women in rural Shetland to earn any income. Recently someone asked me if I could remember being hungry as a child; I don't but we lived on a croft by the sea so food was available. Fish and meat were salted and dried in times of plenty and we always had our own potatoes, cabbage, turnips and a few carrots. There weren't too many jobs for anyone in Shetland before oil and many families left seeking better lives, mostly in New Zealand and Australia. 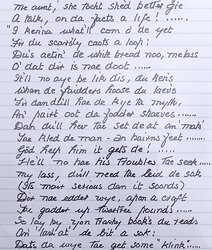 extract from "Da Facts o Life" As we children grew independent she no longer had to knit but the lifetime habit of never sitting "haand idle" was a hard one to break so she usually had some knitting; as she grew older that was often squares for blankets. She loved to read non-fiction and letter-writing took up a lot of her time. She also wrote poetry in dialect, often recalling youthful memories. This is an excerpt from a longer poem she called "Da Facts o Life" where she recalls some of what her Auntie Ellen repeatedly said. These excerpts were published in Knitting Traditions, Spring 2014.

Her diary keeping started in 1961. In middle age, realising that she had lived through a period of huge change, she began to write articles about her early life for Shetland Life Magazine. Eventually these articles were collected, word processed, edited and added to, to make the book, "Slyde in the Right Direction" published in 2008 (now out of print), the year before she died. She was quietly proud of this achievement, though disappointed her loss of sight meant she could not read it herself. Books had always played a huge part in her life and she came to enjoy listening to talking books, borrowed from the library. The royalties from sales of her book were used to record some Shetland books for lending by Shetland Library, to help others coping with sight loss.

Apart from writing her own verses, she collected verses from other places and shared these with friends, often when they were going through a tough time. She kept a record of what she'd shared so that the same person didn't get the same verse twice. I recently found this one which I have shared a few times - but unlike her I have kept no record.