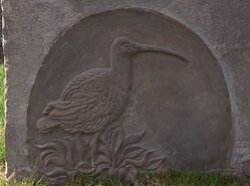 Carved headstone As anyone who follows my blog will know, I don't blog very regularly. This is not from a shortage of material, more a lack of motivation and the freedom to amble along without goals and aims.

I have felt for some time that I wanted to blog about grieving but was not sure it was a wise subject for a blog. However I heard this subject discussed on the radio a few weeks ago when Robert Peston was a contributor and it featured again today on radio when a representative of the Sue Ryder organisation was interviewed about recent research into grieving. Perhaps the interest in this is linked to an ackowledgment that loneliness is now a growing social issue. The research gave me the good news that it takes an average of two years, one month and four days to feel better following bereavement so I’ve not got long to wait! That's certainly better than being told by an ex-work colleague that losing a partner takes ‘x’ months for every year you spent together – fortunately I didn’t retain what ‘x’ equalled but I guess it would have been a biggish number as Trevor and I were married for 39 years.

My mother wrote letters to all her acquaintances when she heard they were newly bereaved – she really disliked sympathy cards. Her first experience of grief was at the age of 11½, when two of her brothers lost their lives in a boating accident aged just 17 and 34, in 1929. Clothes belonging to the women and girls were immediately dyed black; the men wore black ties. Almost three years later she was still wearing black at her sister’s wedding, but the bride did wear white. Needless to say the only black she wore as an adult were shoes, wellington boots or a skirt. I must have been about 10 when she told my younger sister and I about her brothers - I guess she felt the need to offer some further explanation for her refusal to allow us in the skiff (rowing boat) one particular day. I am amazed at how much time we were allowed, unsupervised, to spend by and on the sea. We could row and were well instructed in how to behave in a boat but weren’t able to swim and didn’t have life jackets.

The grief of that tragedy was re-lived over 70 years later when one of her grandsons died in an accident. Similarly one of my paternal aunts re-lived the grief of losing her brother – also in an accident at sea – when her son died in a diving accident. This, I’ve found, is not unusual as people often retell their own experiences when offering sympathy. Occasionally this made me angry but I hope I never let that show for I knew I had to be grateful that they had stopped to speak rather than avoid me. Failing to acknowledge a bereavement is the worst mistake. I do understand reluctance to speak with a bereaved person when it's an unfamiliar experience - in the past I too have been guilty of that.

Another comment I remember is “weekends are the worst, I believe” from someone with correct knowledge but no inclination to offer any invitation. Many have told me my children and grandchildren will keep me going – it is good to have them in my life but I cannot impose on their lives, nor can I live my life through them. I think that knitting is what gives me focus and it did help that I had already started preparations for DVD filming and had agreed to be Shetland Wool Week Patron in 2014 before Trevor's death.

I often wondered what my mother said in her letters to the bereaved but I guess she would have written about how she remembered them, probably with a humerous anecdote. I received many sympathy cards; our sons were overwhelmed by the pile of cards which, for some reason, I felt they should look at. In the end I sorted them into two piles - one where only names were written inside the card and the other where senders had taken the time to write a little of how they remembered Trevor. They read the latter pile and both said they felt better for having done so. It's also important to remember that it's never too late to send a card or note.

The first year was hard. At first there was the physical ache, the need to re-live the final hour again and again, counting the days, then the weeks. The end of that first year, June 2014, was a bleak month as the anniversaries of our marriage, the deaths of my parents, brother-in-law and Trevor are squeezed into 3 weeks. However June also has some family birthdays which aren't forgotten. I borrowed my mother's diary for 1974, the year we married - a hectic year as my two sisters gave birth and my brother also got married. Reading the diary brought back so many memories and brought healing tears and laughter.

After Trevor’s death I received some advice, from various people who knew what they were talking about. I share it now in case it can help someone.

Be kind to yourself; treat yourself every now and then – a bar of chocolate, a new pair of shoes or some yarn are some of my favourite treats.

Accept every invitation – sometimes I ask myself why I said ‘yes’ but mostly it’s bearable and often it’s been enjoyable.

Talk as much as possible about bereavement - one of my widowed friends tells me she ‘feels normal when we talk’. I sometimes read Ben's blog to remind myself that things could be so much worse.

Don't hide away - I go out almost every day - seeing and speaking with another human being is so important. I also make sure the next week in my diary has at least one thing in it. If it’s empty I find something to fill it. Somehow this month I have a lot in my diary and looking at when I will have a full day at home.

Decision making is sometimes much harder when it’s a sole decision. Almost every day I throw something out – either in the bin or given away. There’s still an accumulation of belongings to look through and I foresee many more trips with donations to charity shops - I am mindful that someone will have to clear up after I've gone and if that happens tomorrow I dread to think how long it will take them. I'm told decluttering can be addictive - I need to start soon.

Finally, the background to the photo at the top of this blog. Trevor met Stevie Wark when they were both mature students at Shetland College and he always admired his work. It is fitting that Trevor’s headstone was carved by Stevie and happenstance that some of the stone carving was filmed.